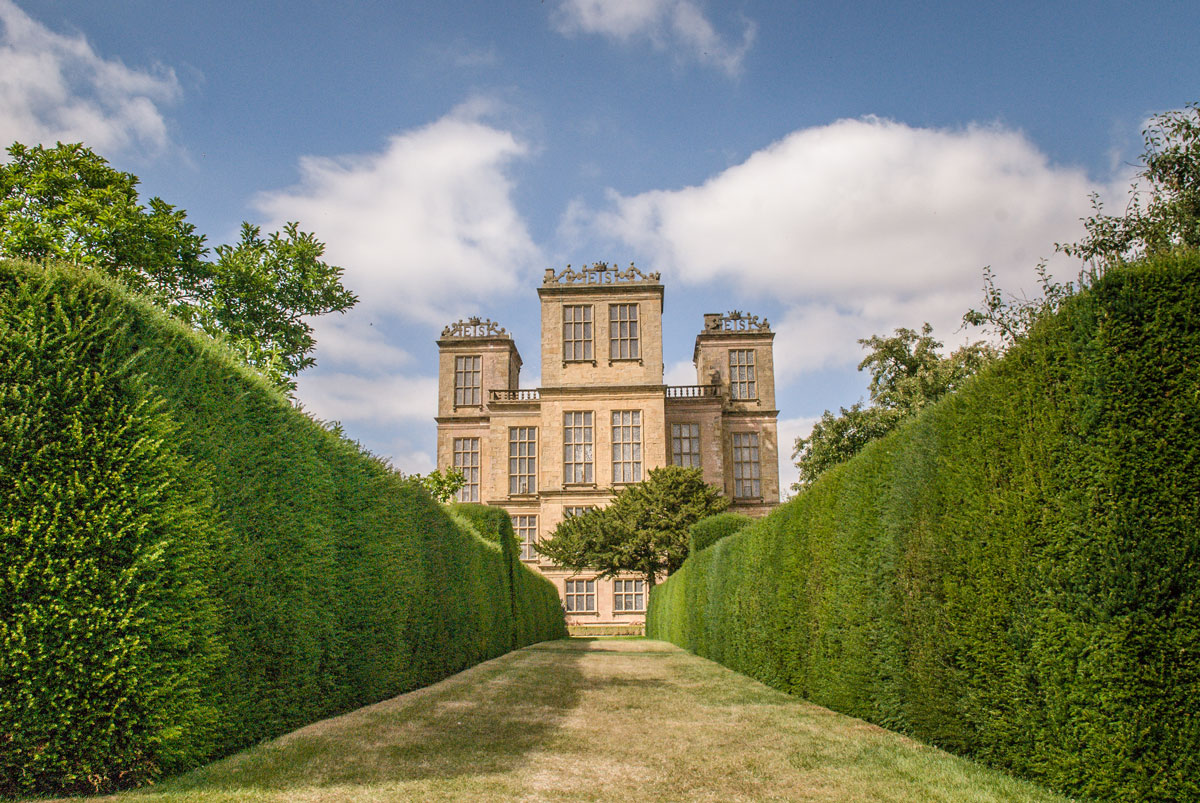 Every Summer we make a pilgrimage to the green and pleasant land of Bakewell in Derbyshire. The soft, clean air, impressive peaks, leisurely activities and tap water that doesn’t taste like chlorine and 6 other peoples’ wee make the Peak District one of my favourite spots for escaping the city. Despite coming here for over a decade, I always find something new to do (I actually just came back from my first ever livestock auction as I write this!), and there is something for everyone to enjoy. 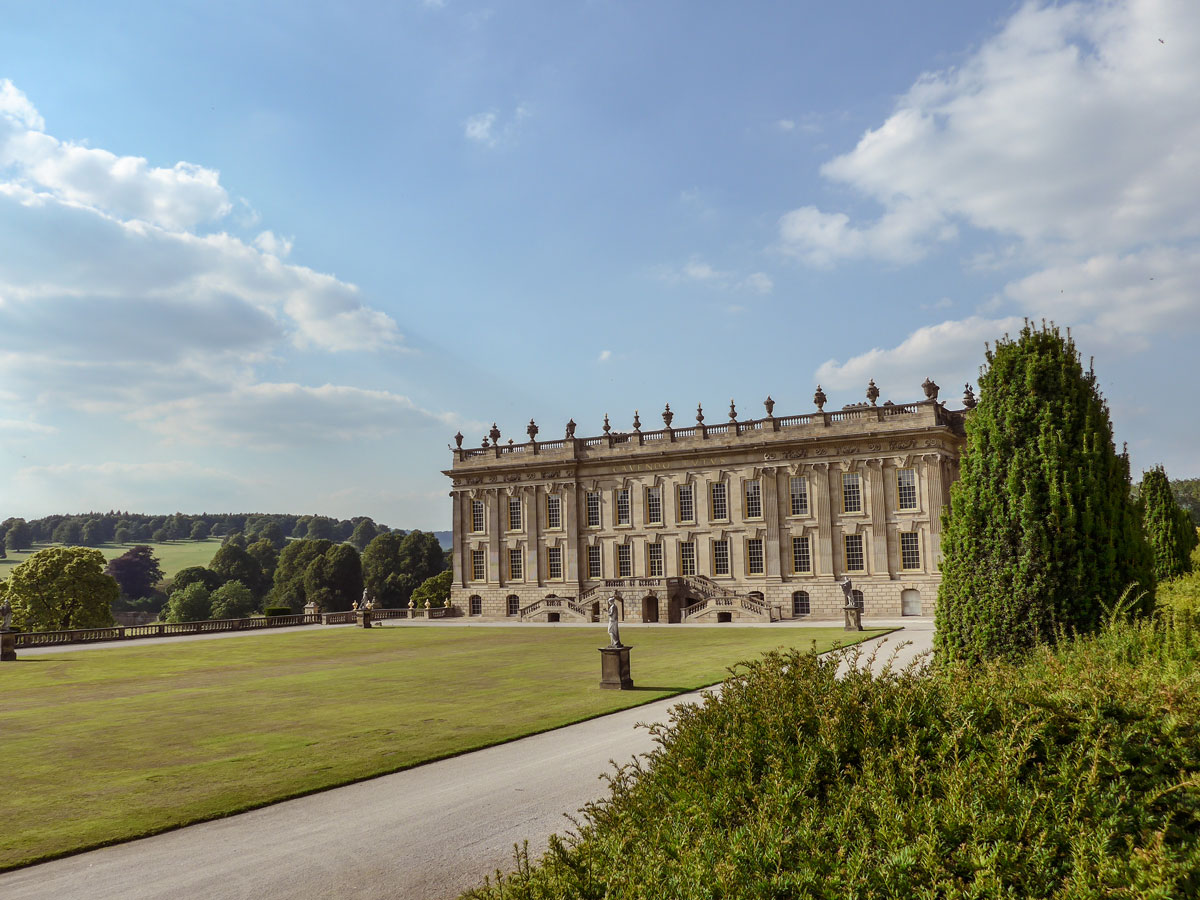 Often voted Britain’s favourite country house and it’s not hard to see why! The seat of the Duke of Devonshire, it has been home to the Cavendish family since 1549. The house was originally built in the 1500s, but was eventually deemed unsafe and had to be rebuilt from 1687 into the Italianate/English Baroque masterpiece we see today. You can spend the entire day here wandering around the house, and admiring the architecture and artworks. Then there’s still the 105 acres of manicured Capability Brown gardens full of ancient and modern waterworks, lakes, sculptures, and a maze! There’s also a farmyard, playground, places to eat, and one of the best gift shops I’ve ever seen. Not only does it sell so much lovely stuff that you’ll want to redecorate, but some of the displays are in old stables. So pretty! 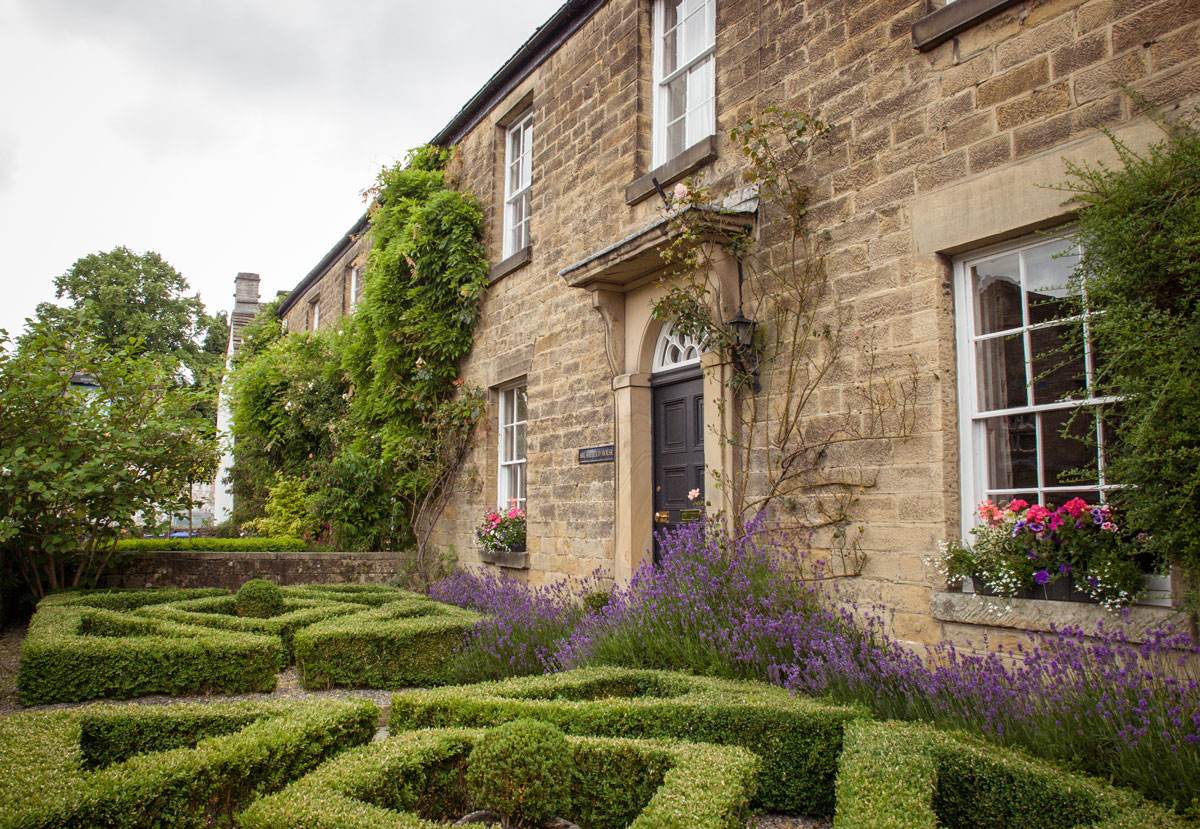 Bakewell is a small market town, situated on the banks of the River Wye within the Peak District National Park. The stone buildings, medieval stone packhorse bridge and beautiful scenery are a magnet for artists and sightseers. Nearby surrounding villages are also quaint and worth a visit – check out Ashford in the Water and Edensor. 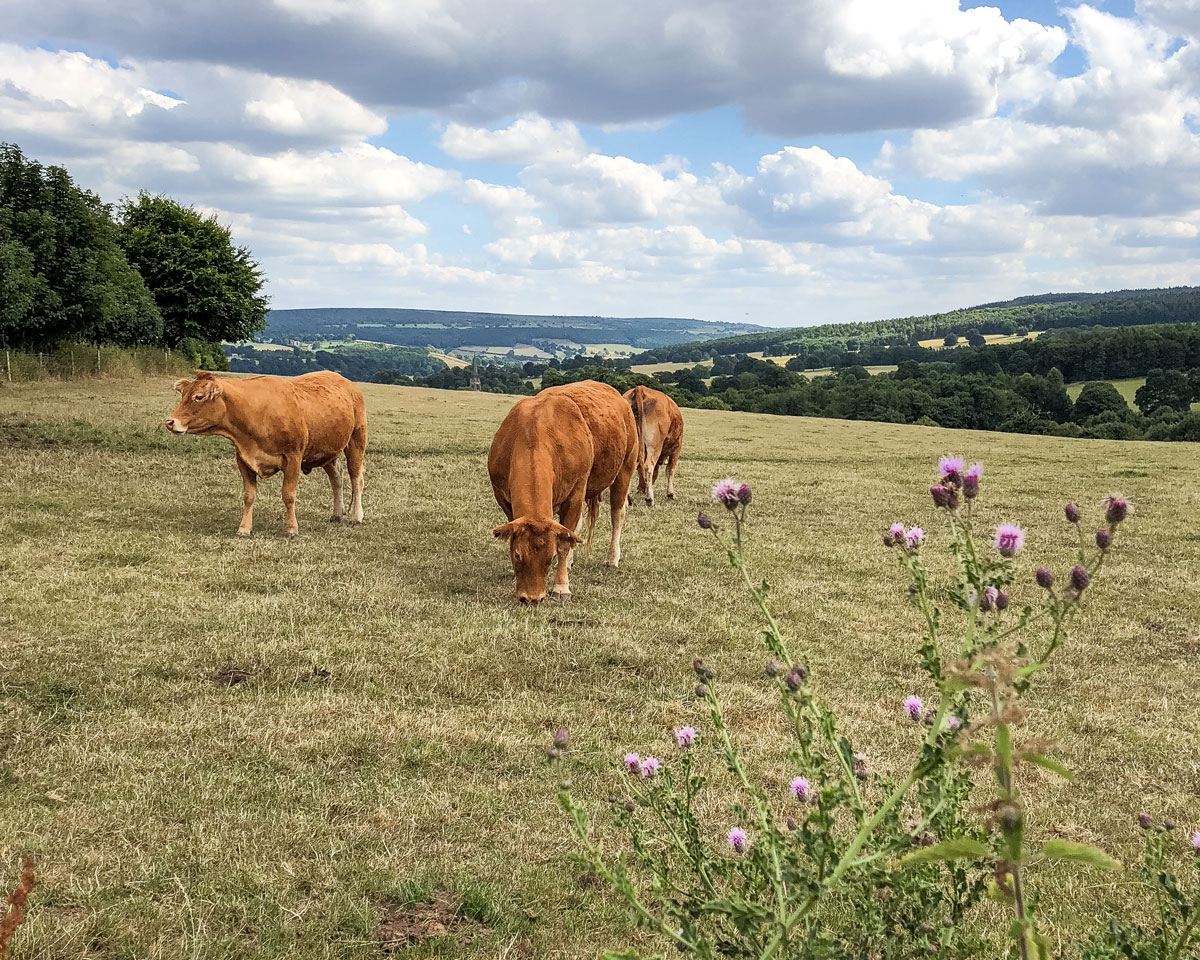 The main Chatsworth Estate owned by the Duke and Duchess of Devonshire covers almost 12,500 acres in Derbyshire. This includes Chatsworth House, the surrounding parkland, and numerous properties in the surrounding villages. I didn’t realise that they have at least another 20,000 acres in Yorkshire and Ireland to name couple of places! Near to Chatsworth House in the village of Pilsley, is a delightful farm shop that sells produce grown locally on the estate. You can stop in to buy Chatsworth beer, locally reared meat, and fresh fruit and veg. If you don’t fancy cooking yourself, there’s a restaurant attached to the farm shop. Sit outside for a stunning view down the valley into Edensor. 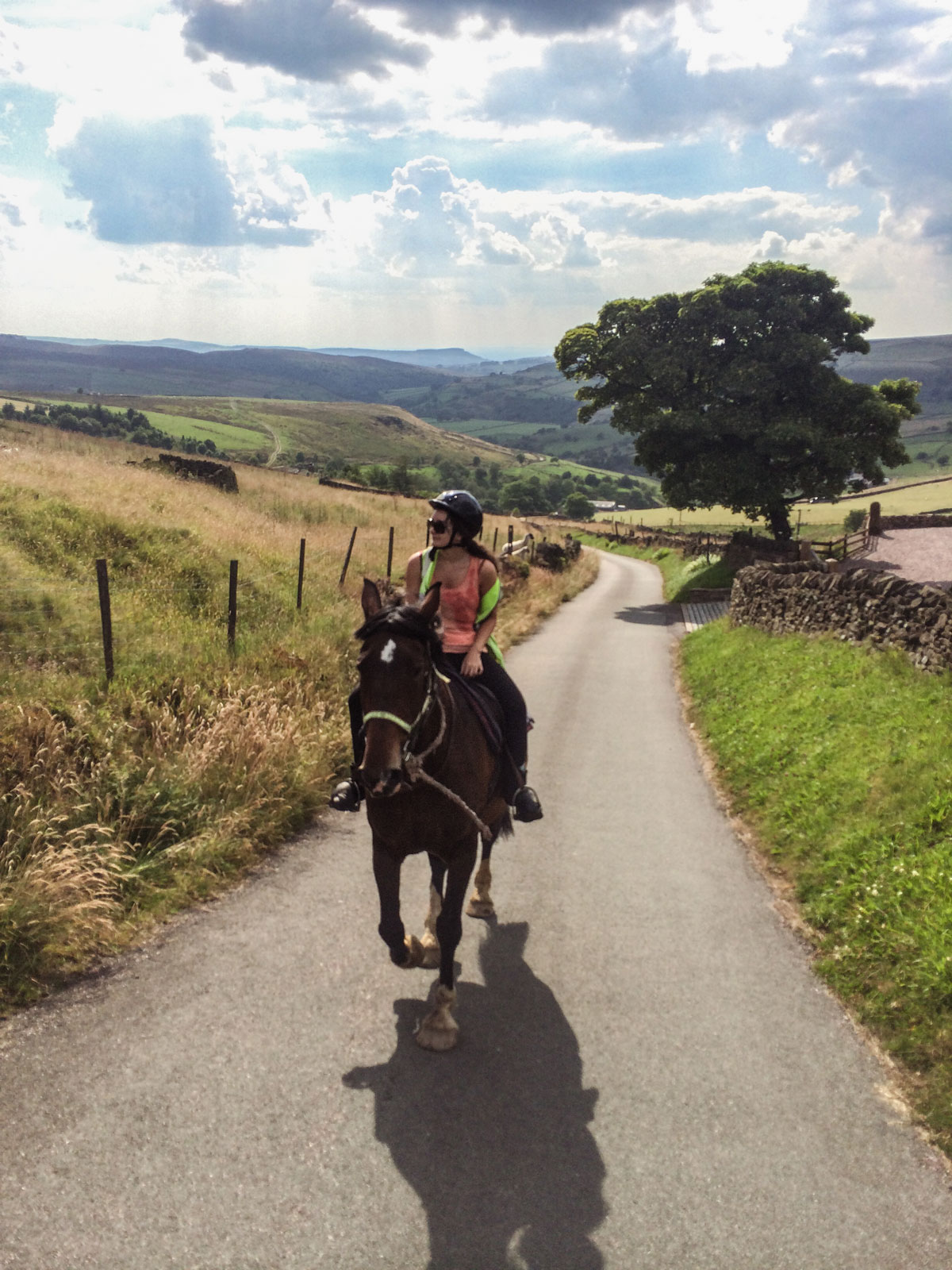 Take a ride from the edge of Flash, England’s highest village, to some of the lesser known areas of beauty in the Peak District. We did a 3 hour ride with Northfield Farm that takes you through stunning scenery on old pack horse trails towards Three Shires Head. It’s a beautiful spot where 3 county boundaries meet – Cheshire, Staffordshire and Derbyshire. 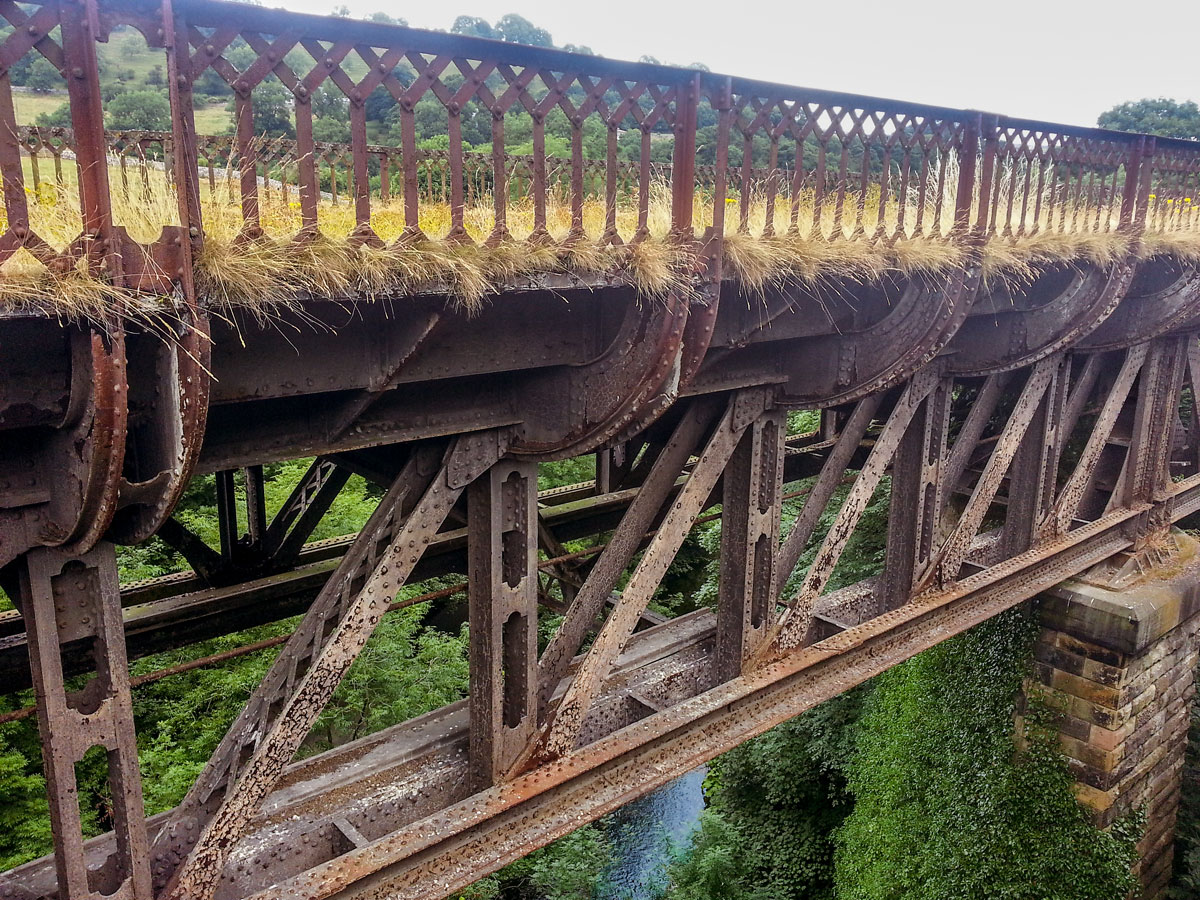 The Monsal Trail runs along the old Midland Railway line for 8.5 miles and is a traffic-free haven for walkers and cyclists. The trail runs from Bakewell through spectacular limestone peaks with incredible views into valleys below. In 2011, railway tunnels which were being restored to safety were opened, so you can enjoy the full length of the former railway route for the first time since it closed in 1968. Before the tunnels were open, we had to carry our bikes over the hills (not so much fun) before hurtling down the other side at top speed (so much fun)! Make sure to stop at the Headstone Viaduct at Monsal Head for incredible views. 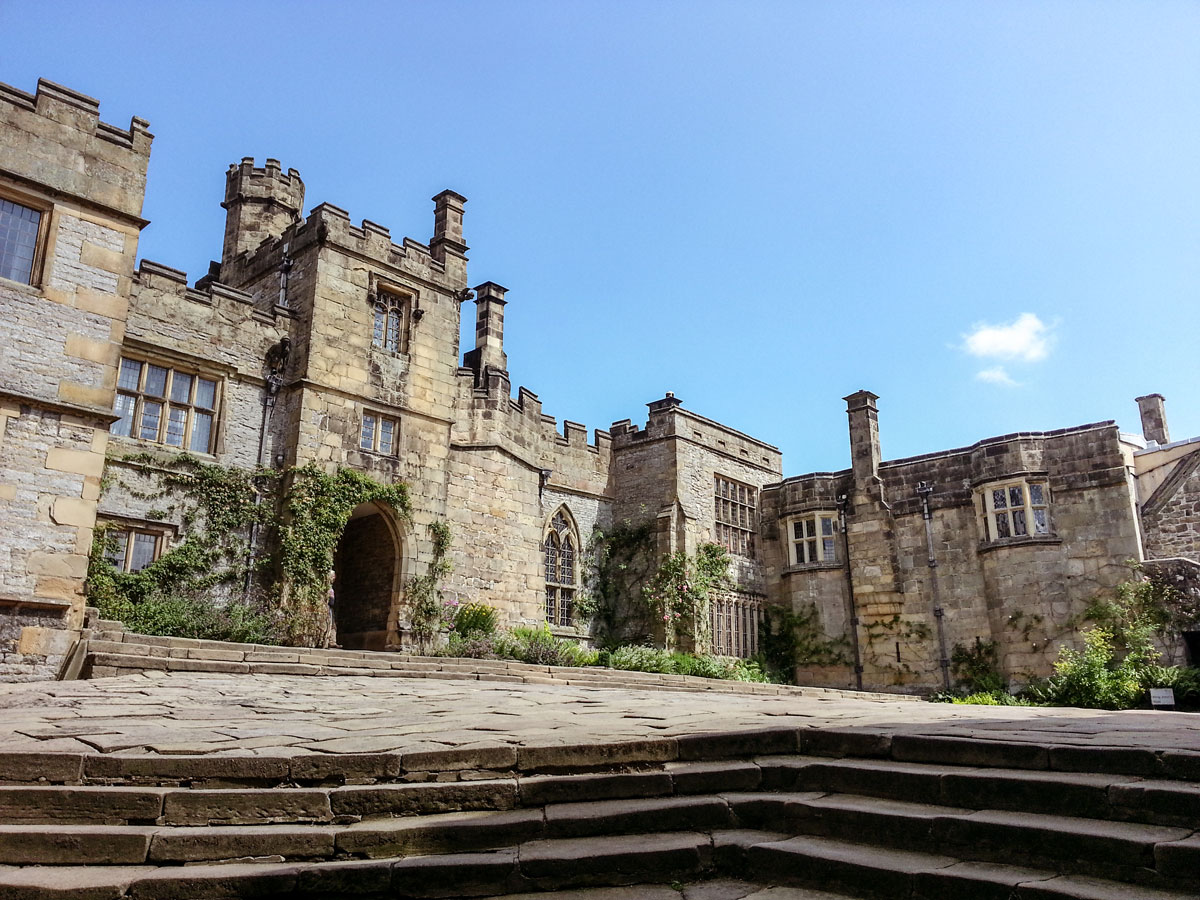 The origins of Haddon Hall date back to the 11th century where it was mentioned in the Domesday book as being owned by William Peverel, a Norman knight. Since then the manor has changed hands numerous times, and been restored and rebuilt. With parts dating back to the 12th century, Haddon Hall is probably the best example of a fortified medieval manor house in existence. It lay empty for over 200 years from 1700 until the 1920s when the Duke and Duchess of Rutland restored it to its former glory and made it habitable again.

Inside you can explore the medieval kitchen (complete with original worn down chopping block!) and get an understanding of how people at this time lived. Oddly, they would promenade up and down the long Elizabethan gallery to get their exercise! The gardens are also delightful with terraces, waterworks and exterior stone walls adorned with fragrant climbing roses. You might recognise Haddon Hall from movies such as Jane Eyre, The Other Boleyn Girl, and Pride and Prejudice. 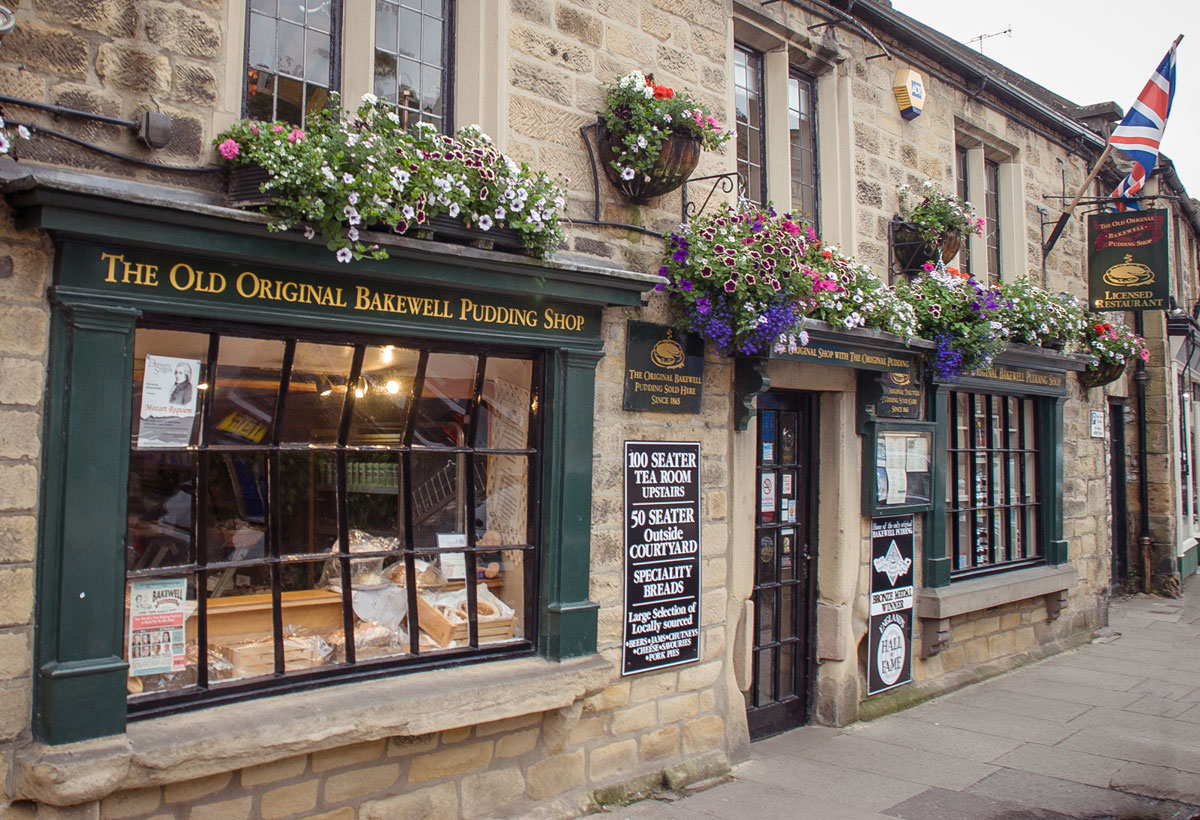 Enjoy an authentic Bakewell Tart in the place where it all started… The delicious puddings were actually first made by accident in around 1860. There was a misunderstanding between the owner of a local inn and her cook. Some visiting noblemen ordered a strawberry tart, but the cook spread the egg mixture on top of the jam instead of stirring it into the pastry. The resulting pudding was so successful that a lady called Mrs. Wilson who lived in the cottage now known as the Old Original Bakewell Pudding Shop got the recipe and started a business of her own! Bakewell tarts are still handmade from the secret recipe there today. So stop in and try one as they were intended to be eaten – hot with cream or custard. 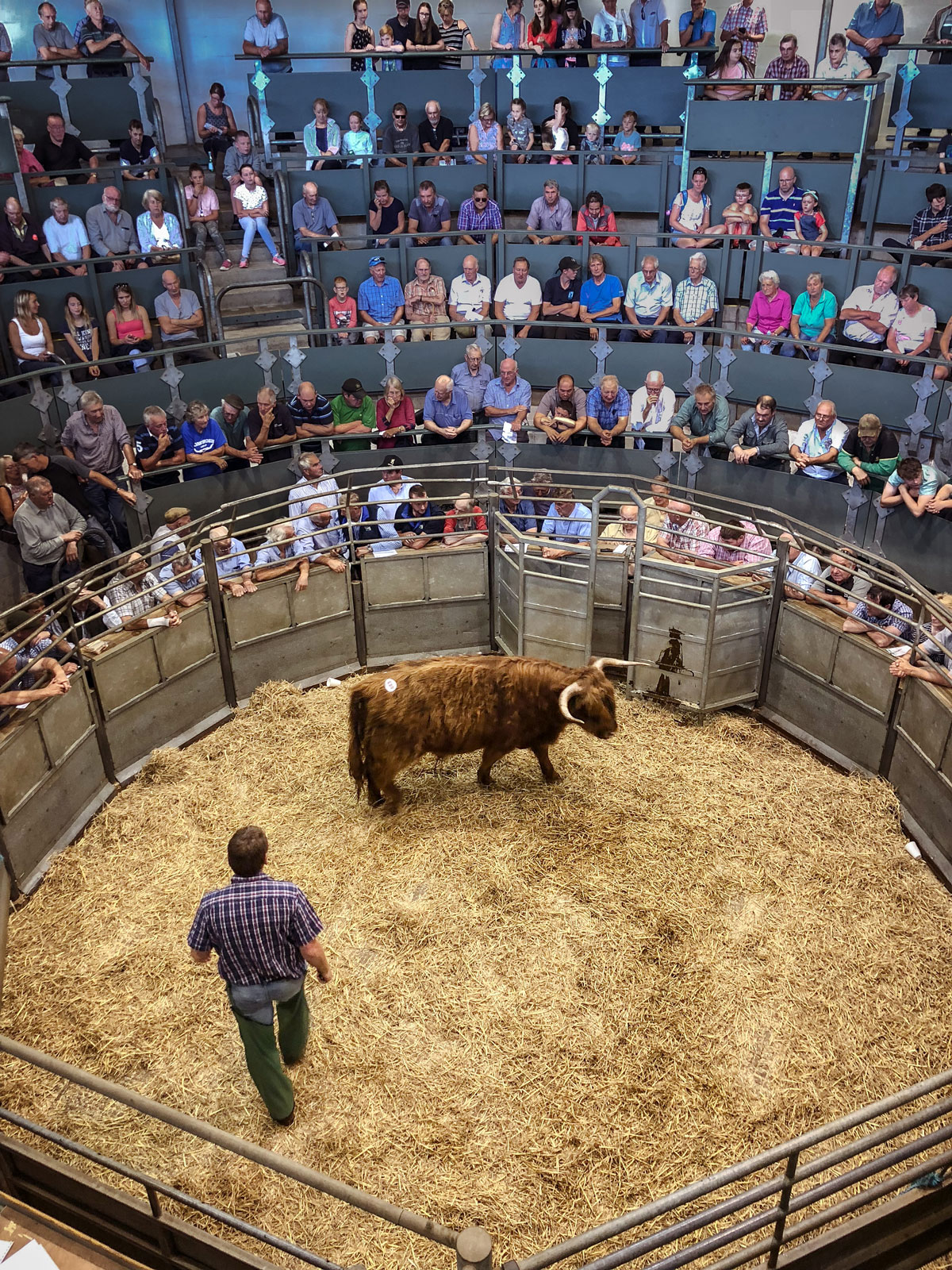 It’s an assault on the senses but worth stopping in to experience a proper livestock auction where they sell sheep and cattle. It’s a finely tuned operation of trucks turning up and siphoning their animals into the relevant pens. Then the auction team whizzes around with an iPad and a chip-reader to scan all the chips on the animals who have been brought in for sale that day. Finally, the animals get paraded through the arena to be bid on by farmers who have travelled from far and wide to bag a fluffy new sheep or prize bull. The sheep aren’t paraded through the arena but are auctioned straight from the pens. Try and wear sturdy, waterproof shoes or wellies as the floor in certain areas is understandably farm-yardy, and keep children close as it’s a dangerous environment.

Walking or Climbing at Stanage Edge 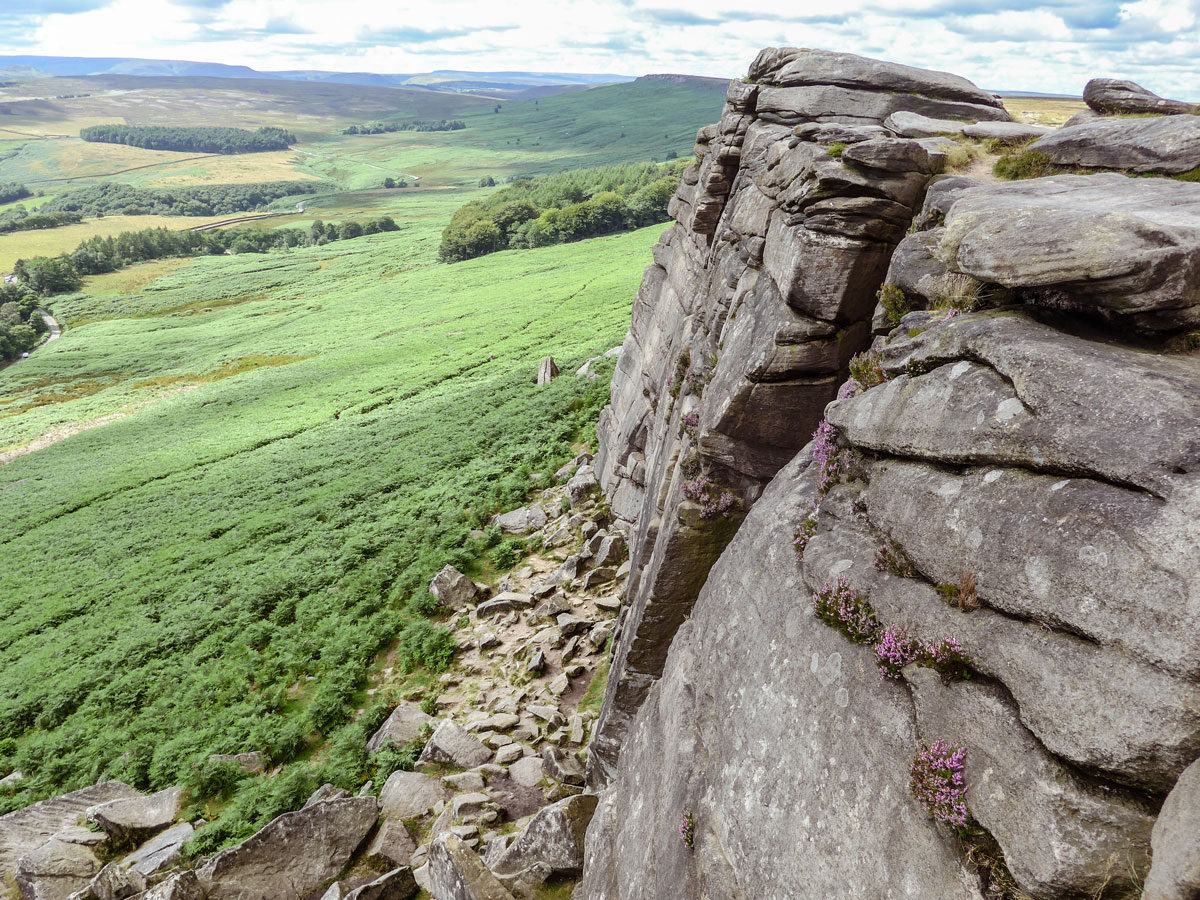 Stanage is a gritstone cliff popular with rock climbers due to its naturally weathered three mile edge. Walkers love it too for the enchanting views of the Dark Peak moorlands and the Hope Valley. The highest point is High Neb at 1500ft above sea level. Once you’ve experienced the incredible view and bracing fresh air, head to Robin Hood’s Cave, part way down the cliff face. While there isn’t a path straight there, it’s an easy scramble down a rocky trail to get there and it’s the perfect spot to shelter from any unexpected weather or stop for a flask of coffee. Rumour has it that Robin Hood and his band of merry men sheltered in that cave, which makes sense given that he was born only 8 miles away. Decades ago, areas of Stanage were quarried to produce grindstones for flour mills and you can still see some of these stones, carved and ready to be used, strewn along the hillside. 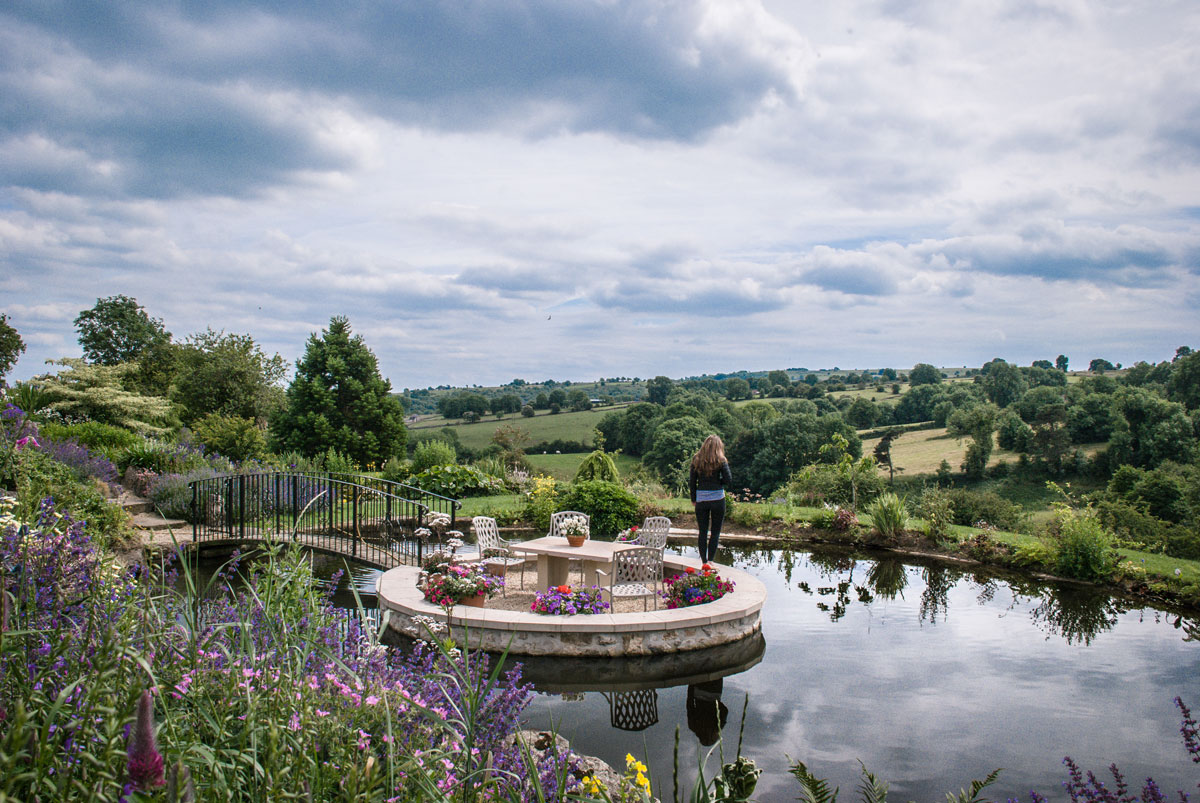 Near to Bakewell and sitting 900ft above sea level, is Hollies Plant Farm Centre in Bonsall. They sell award winning plants and are very reasonable. Built around an old stone house, they have beautiful gardens that you can wander. Make sure to check out the seating area in the centre of the fish pond to watch the local birds dive in for a drink. 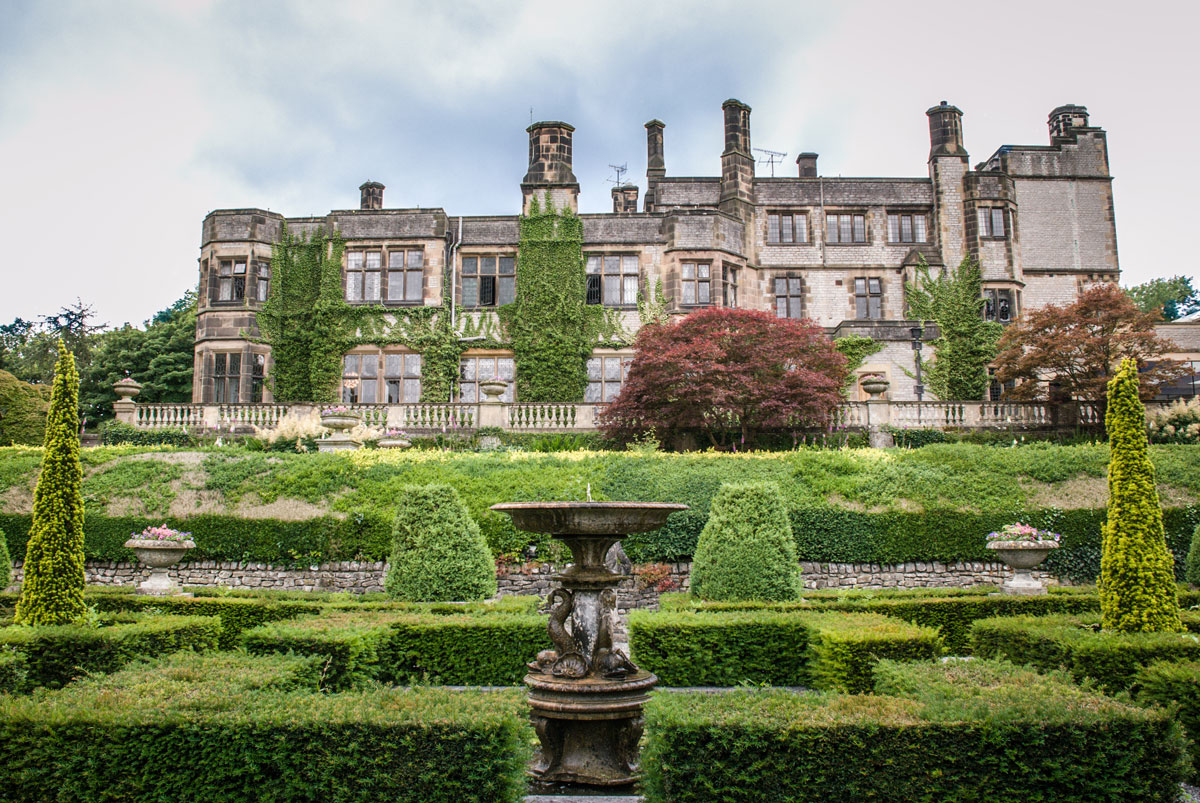 This gorgeous Jacobean country house is surrounded by manicured gardens. The owner wanted to be able to see ‘1,000 shades of green’ from his bedroom window, which I’d say they’ve achieved with their series of garden ‘rooms’ spread over 12 acres. The gardens include temples. statues, urns and grottos. Some of the statues have come from Clumber Park and Chatsworth stately homes, while others were gifted by the Greek government.

The house itself has changed hands several times since the 12th century, but what we see today is the work of a Sheffield lawyer, George Marples. In 1896 he extended the house, planted the gardens, built outbuildings, and even built a private train station! In 1929, Charles Boot purchased the estate and further improved it. He won the contract to demolish a stately home, Clumber Park which was destroyed in a fire and installed lots of statues, fountains and building facades that he rescued from there. 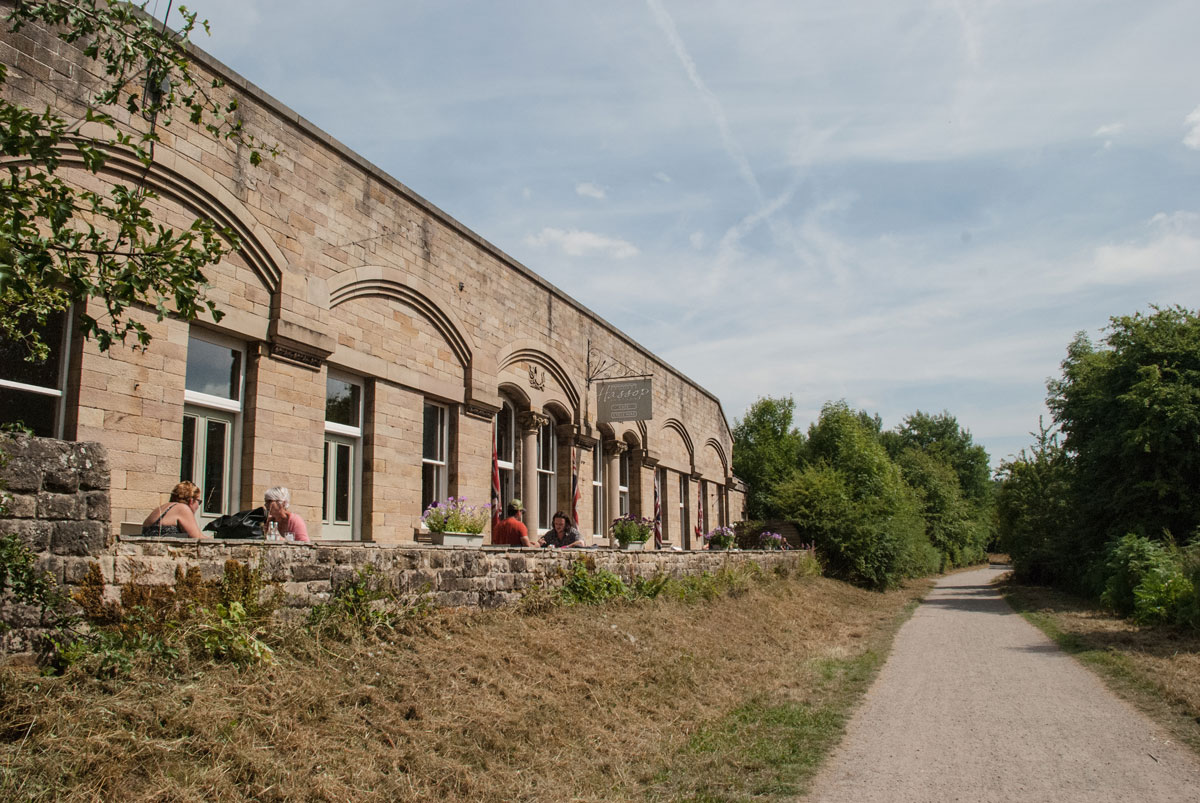 Positioned along the Monsal Trail, this former train station can either be a destination in itself or you can stop in on your way down the trail. After the railway closed to goods trains in the 1960s, the station started selling tractors and other agricultural equipment. However, since 2010 that is no more! They now have a great little café which serves hearty food and a good selection of drinks. Once you’re full you can wander around the gift and book shop, or there’s a bike hire store if you need some wheels. There are tandem bikes available to hire but after we tried it in the car park one year and fell off about three times, we thought we’d stick to solo cycles! 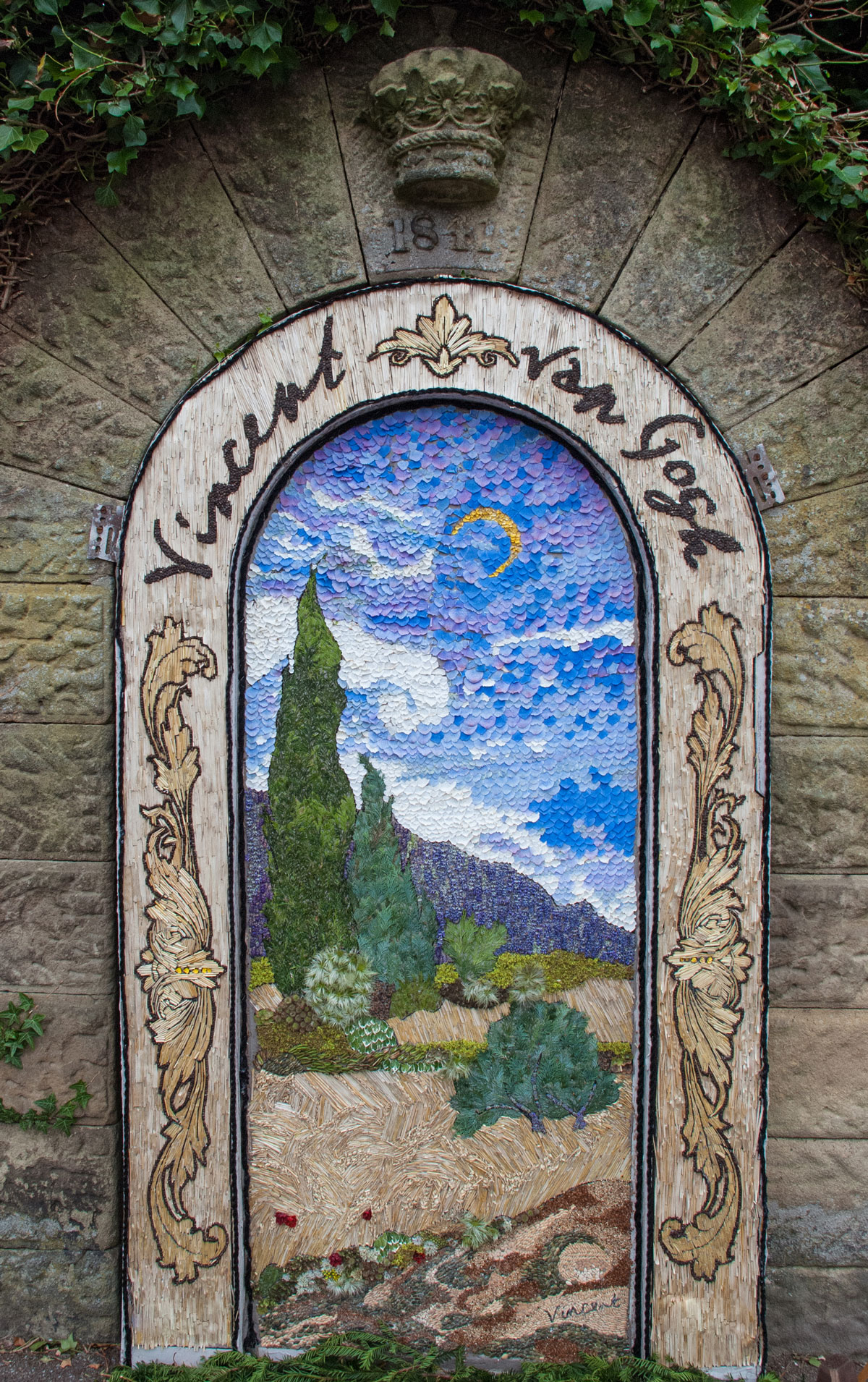 One lovely tradition that is unique to the county of Derbyshire is a well dressing. Between May and September, volunteers create beautiful artworks using natural materials to display at wells. This ancient tradition is thought to have been brought to the area by Romans or Celts, is to give thanks for the fresh water springs. More than 80 towns and villages show off their floral masterpieces made from clay, leaves, moss, and flower petals next to wells and springs. Most towns will hold a blessing ceremony before throwing a party, bringing out the whole community! Have a look at this well dressing calendar to see where to enjoy this unique event – you can even get involved in making the artwork! 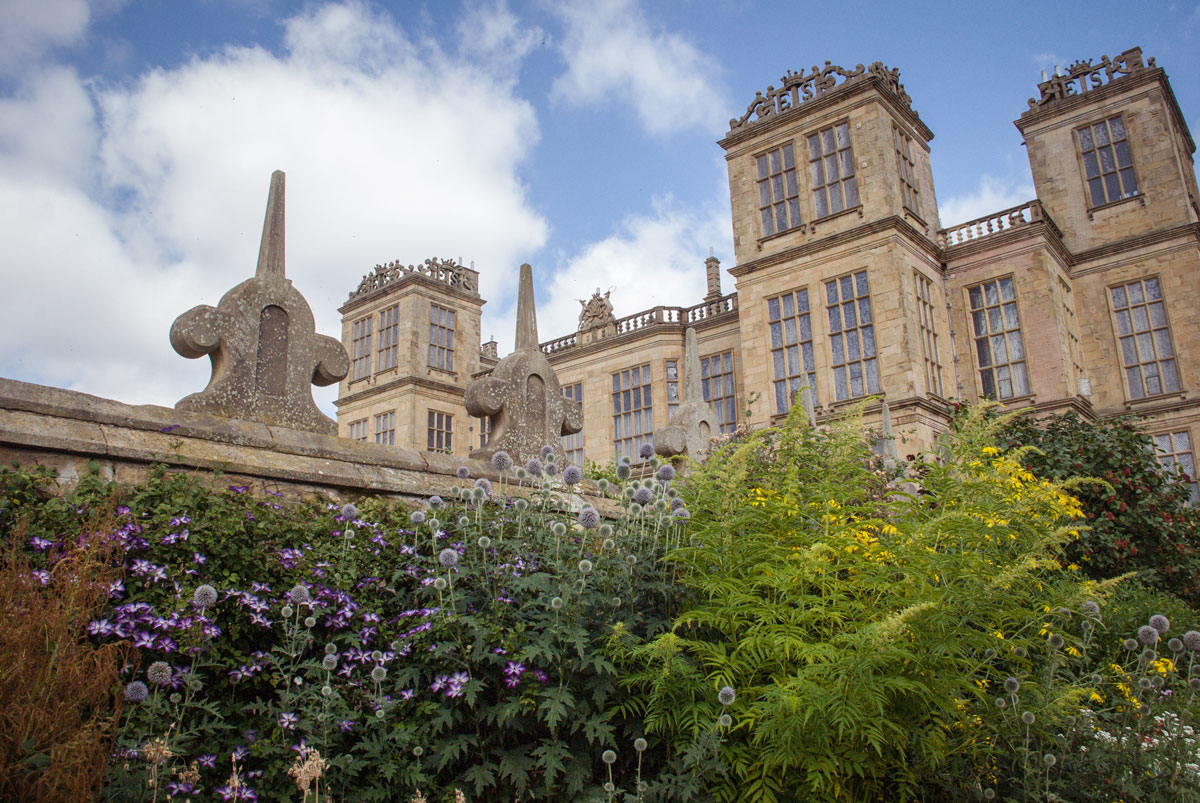 The National Trust’s Hardwick Hall is an exceptional Elizabethan country house high on a hilltop overlooking expansive Derbyshire countryside. Built by Bess of Hardwick (Elizabeth Shrewsbury) in the late 1500s, it was designed to be a conspicuous statement of her power and wealth. She was after all, the richest woman in England after Queen Elizabeth I. This might have had something to do with her formidability, but it could have also had something to do with the fact that she married rich men four times and they happened to keep dying…

The house has enormous windows, particularly for a time when glass was considered to be a luxury. People still use the saying, “Hardwick Hall – more glass than wall.” Nowadays, you can wander the decorative rooms and admire the ancient artwork, tapestries and furniture which have such interesting stories. National Trust volunteers who work in the house are also super friendly and full of knowledge they’re happy to share – ask them something random and prepare to be intrigued! The gardens are also worth a wander with beautiful borders and a kitchen garden with different scents around every corner. Hardwick Old Hall, a ruin of a slightly earlier house, is also on the grounds and provides an x-ray like look into the fabric of the building. Harry Potter fans might recognise Hardwick Hall as Malfoy Manor in Harry Potter and the Deathly Hallows – Part 1.

Visit Castleton to admire the stalactites, stalagmites and huge caverns at Blue John Cavern on an hour long guided tour. This pretty, semi-precious mineral has been mined here for centuries, and is only found at two sites in Derbyshire. It gets its name from the French ‘bleu-jaune’ meaning ‘blue-yellow’ owing to its colour. You can venture deep inside the natural water worn caverns to learn about how the miners still hand mine the stone to this day, armed with picks and shovels. Craftsmen make jewellery and ornamental objects out of the stone, some of which are sold in the gift shop.

What are your favourite places to go near Bakewell? I’m always on the lookout for new adventures! Leave a comment and let me know x