Most mornings, we’d go and soak up the sunshine by the pool, get a bite to eat and plan our day. With the day’s paper, Gulf News, tucked under my arm, we’d head there through the heavenly scented Retreat Spa in Tower One of Grosvenor House. It took us a couple of days to discover that there’s ANOTHER pool and ANOTHER spa in Tower Two at Siddharta Lounge by Buddha Bar. 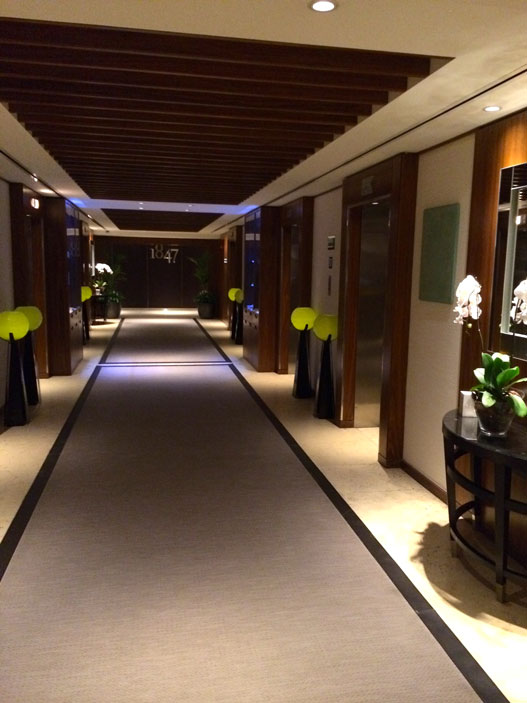 After emerging into the scorching desert sunshine, we’d snag a huge daybed by the pool and within seconds, staff clad in crisp white uniforms would come rushing out with towels and trays of iced water & fruit. The end of Feb was hot enough, I think I’d sizzle if visited in the 40°C+ summers! 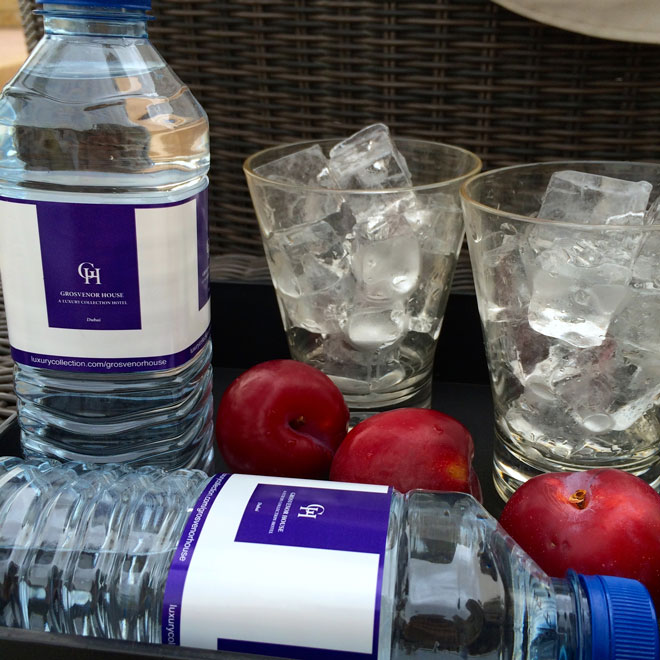 By the time we’d settled in, the sun would sneak around the corner of the building and clear the haze. 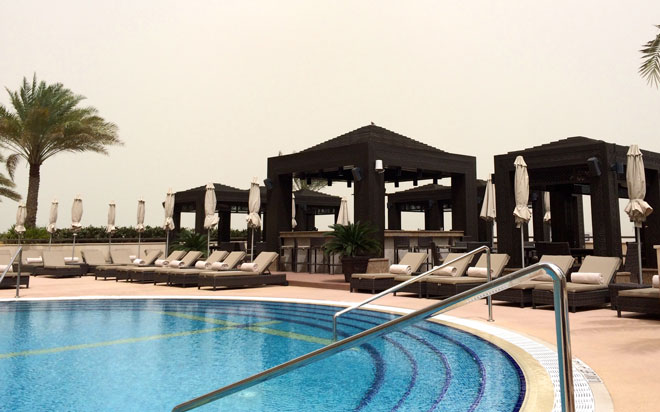 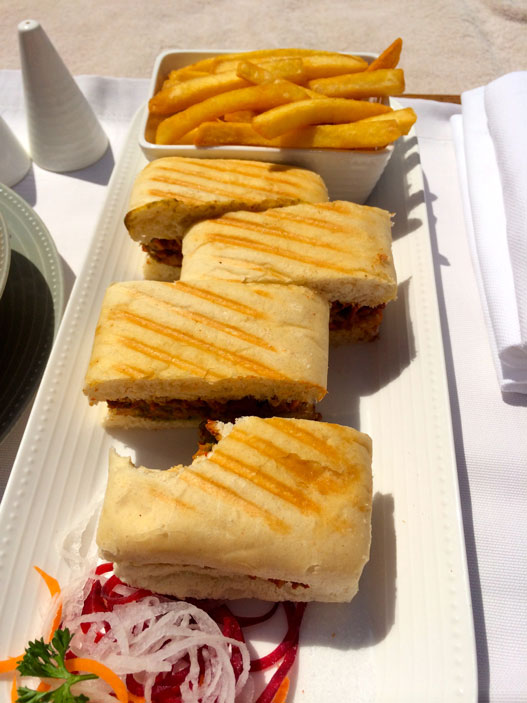 Re-energised after the carb fest, we decided to venture across the bridge between the towers and check out the pool at Siddharta Lounge… 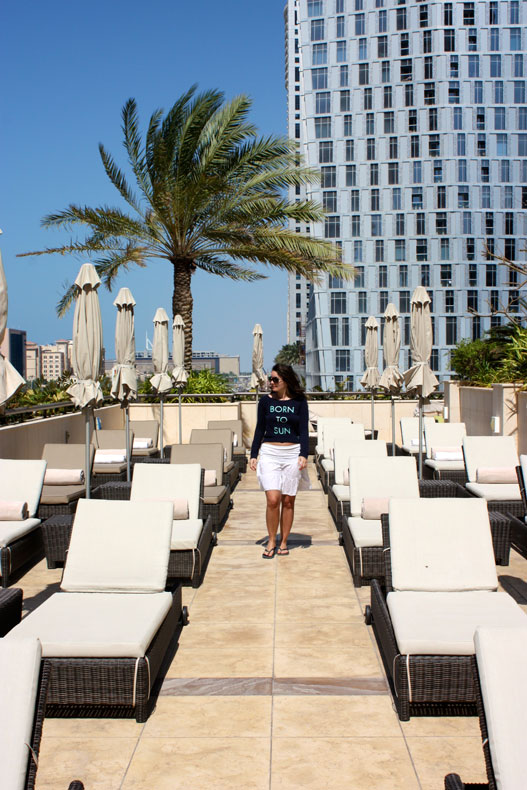 The only disappointment was that we hadn’t discovered it sooner! We lay by the pool for a while but all the fun was around the corner… 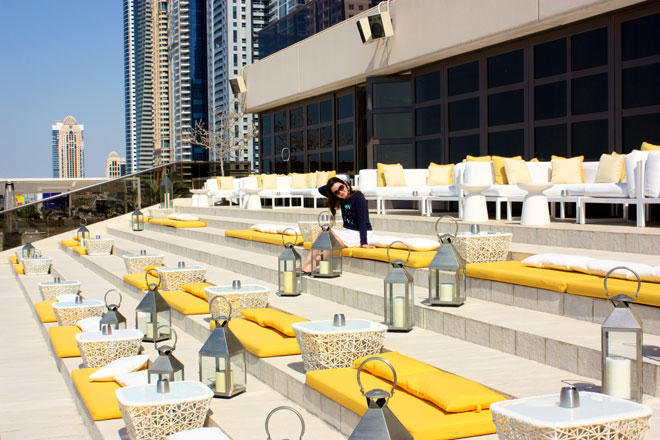 …Because you could watch nutters jump out of planes! Siddharta Lounge overlooks the palm and Skydive Dubai. You can watch the plane take off from a short runway over the sea, and minutes later, the sky is awash with colourful dancing parachutes. There’s two in this picture – can you spot them both? 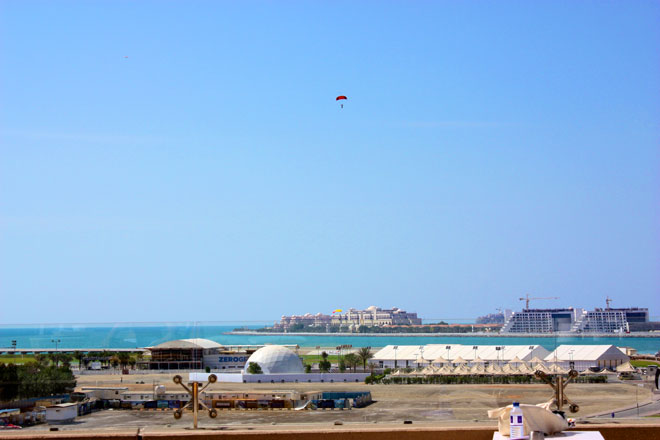 They also bring out iced water and fruit pops! ♡ 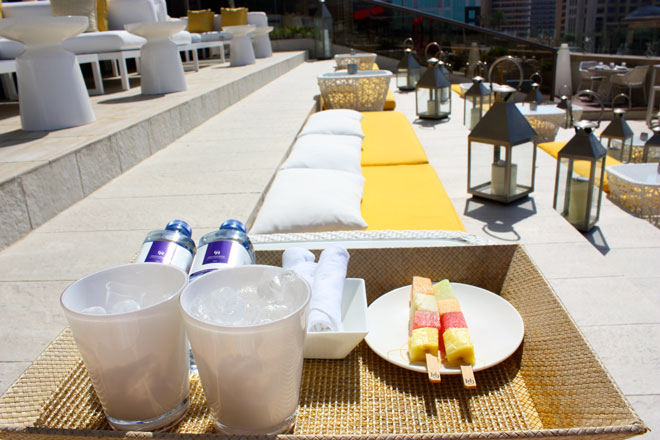 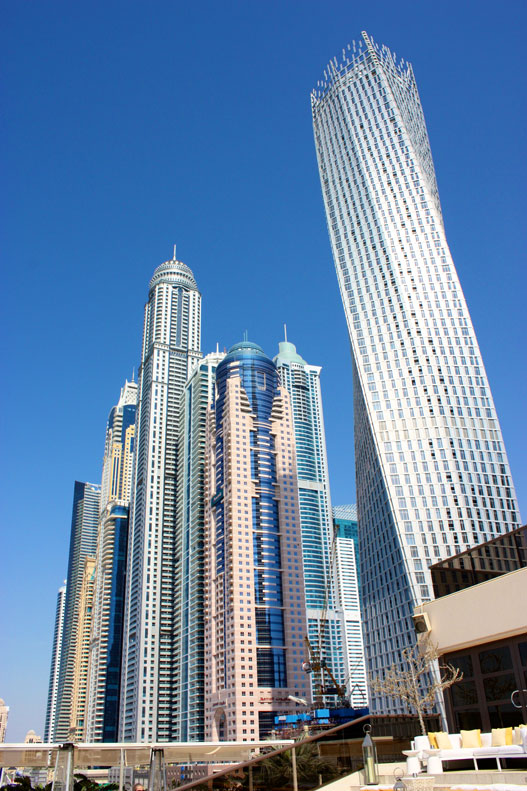 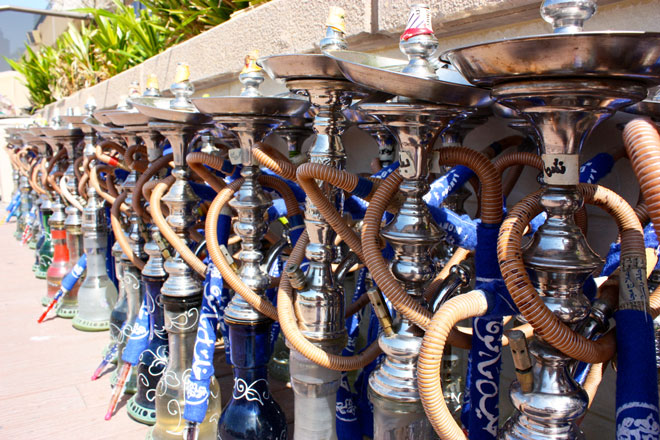 During the day, it’s only open to hotel guests but at night there’s an influx of beautiful people who dine, drink cocktails, dance and smoke sheesha til the early hours. The food is amazing and it has a relaxed lounge vibe – probably why it became our go to spot when we didn’t feel like venturing far. 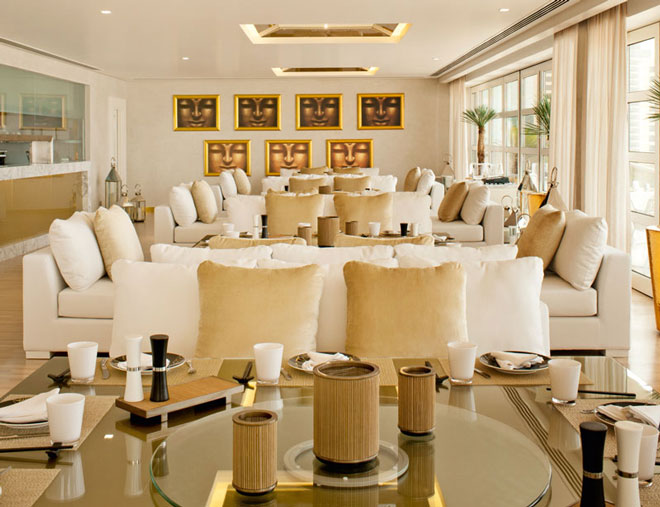 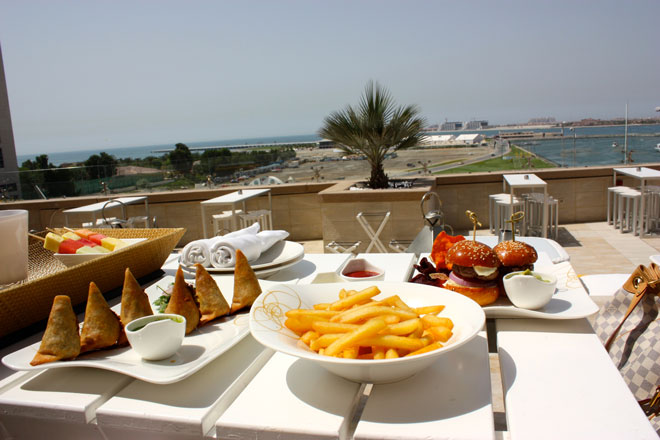 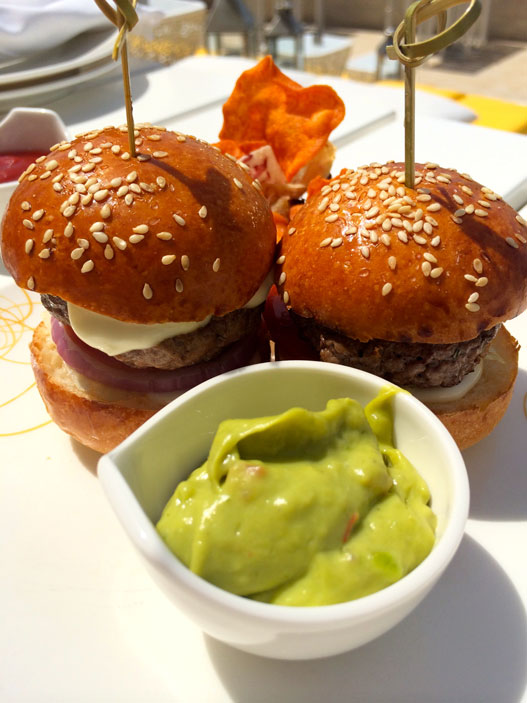 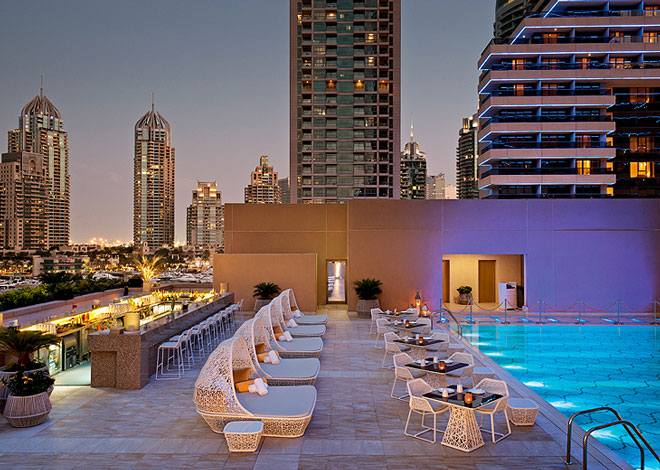 Some days we’d get over-excited and run around the city like kids until we were so hungry we could barely move. So we’d come to Siddharta grab some cocktails and make up for it! My fave was the dangerously delicious Phi Phi Party Time, a mix of rum, blackcurrant liqueur, mint, sugar & lime (yes it tasted like Ribena). The only thing that made it better was that the waiter who always looked after us couldn’t pronounce it and called it Phi Phi Farty Time. The chilli chicken stir fry, rice & vegetable spring rolls with sweet chilli coriander sauce were awesome but so filling they left us with no room for dessert! So we had some strawberry sheesha instead. 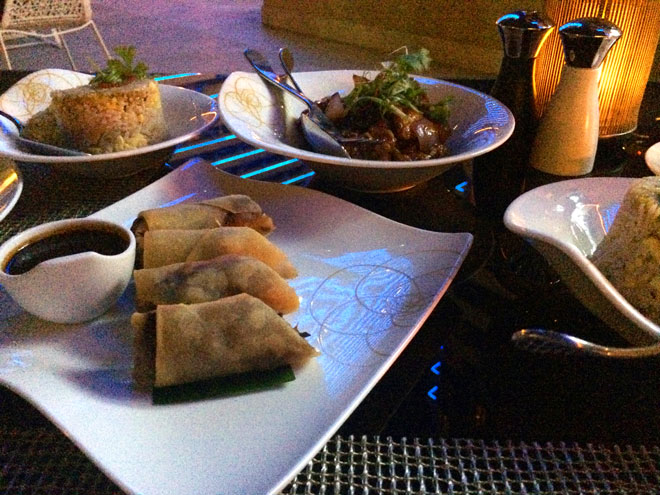 I love how laid back and friendly this place is but one thing struck me as a bit strange. Dubai has gone SELFIE MAD! Women and men would shamelessly #selfie in the middle of dinner or while having a conversation, and of course, the bathroom had been turned into a photo studio. There’s a specific process that they seemed to follow too… For your very own #DubaiSelfie

1. crack out your phone, it doesn’t matter if you’re mid-conversation or still chewing your last bite
2. preen yourself for a little while
3. hold phone at arm’s length
4. contort your neck and pout
5. look at the photo
6. not good enough. Repeat steps 1-5 a few times. 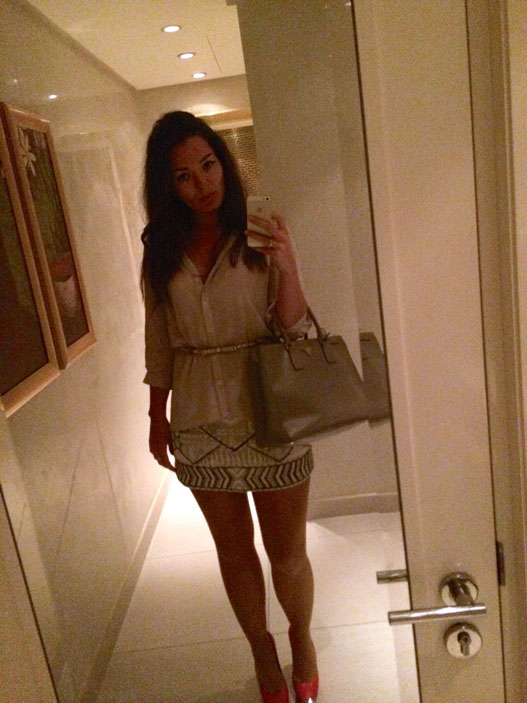