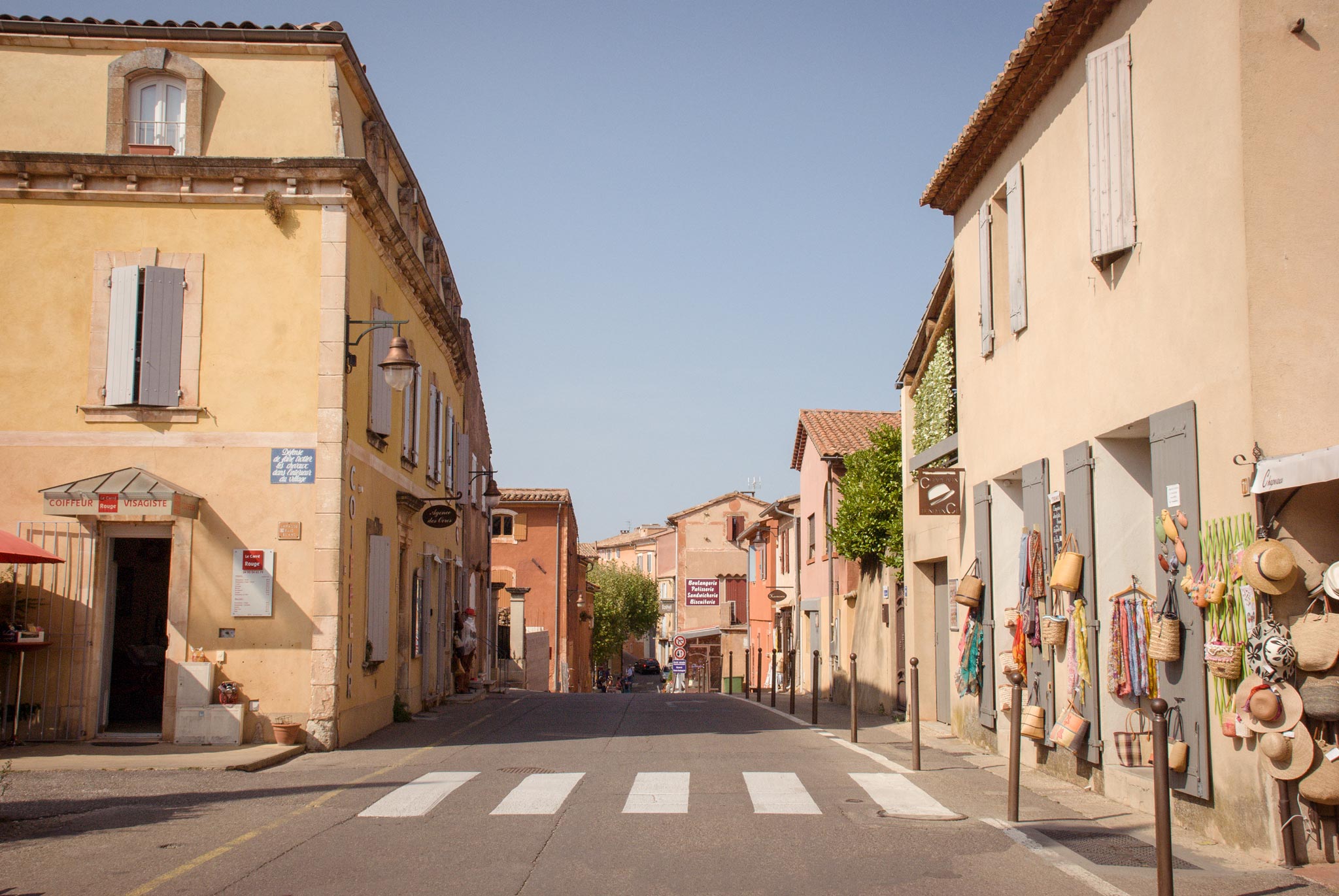 For me, when you say the South of France it immediately conjures up images of azure blue seas and sipping rosé overlooking the coastline. However, heading inland to the National Parks is a veritable treat of dramatic scenery, stunning stone buildings, ancient Roman structures, lavender fields and olive groves. Provence is more understated than the Cote d’Azur but no less beautiful or luxe. En route to our destination, we visited these five beautiful Provence villages in just a day. You could easily stretch this out to spend more time in each spot.

View the full Provence Itinerary details here or read on to find out more about each spot. 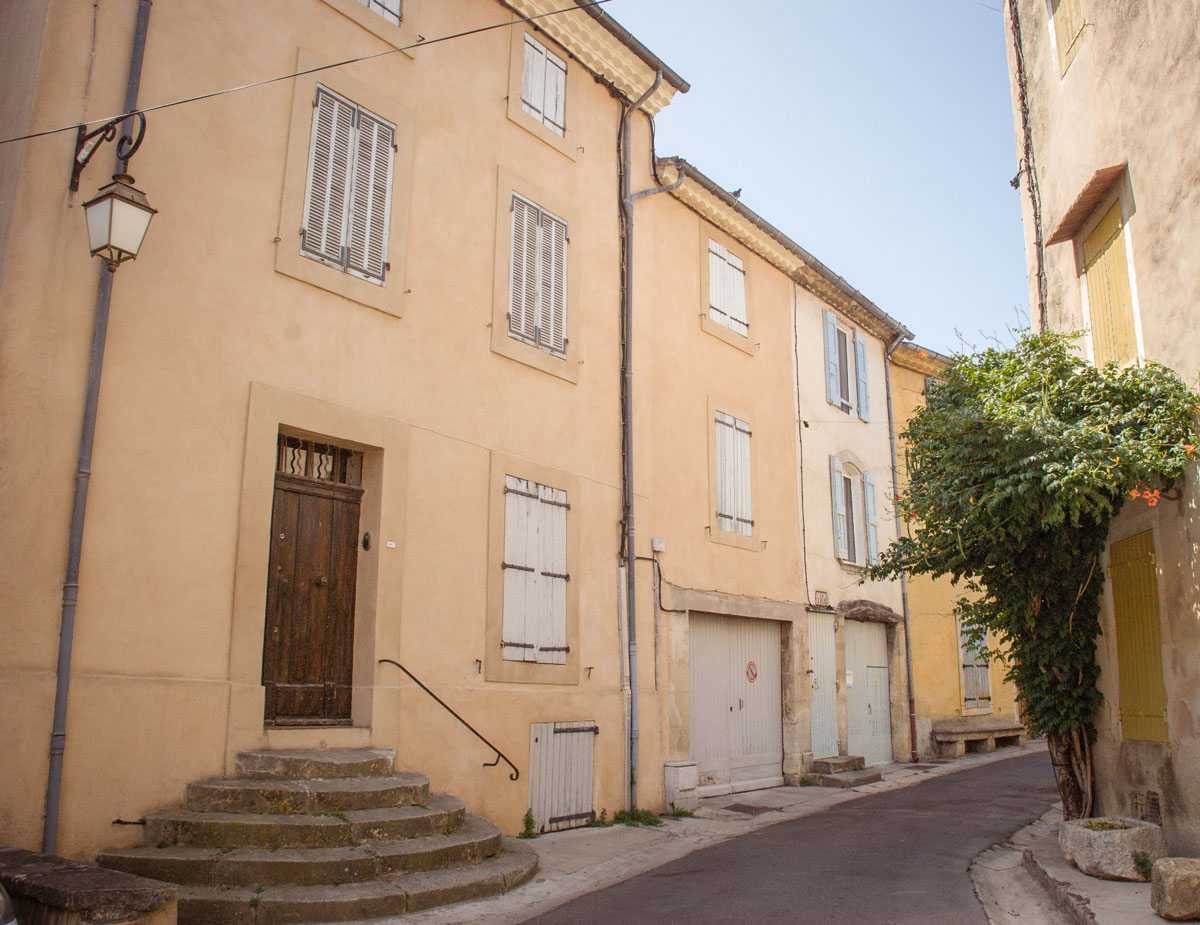 It’s not hard to see why Lourmarin is called “one of the most beautiful villages in France”. It’s idyllically tucked between olive groves, almond trees and vineyards. The village itself has narrow streets lined by pretty houses adorned with pastel-painted shutters. Weaving through the winding cobbled streets we came across a market which is on every Friday selling fresh local produce, soaps and other things you’ll want to fill your suitcases with. 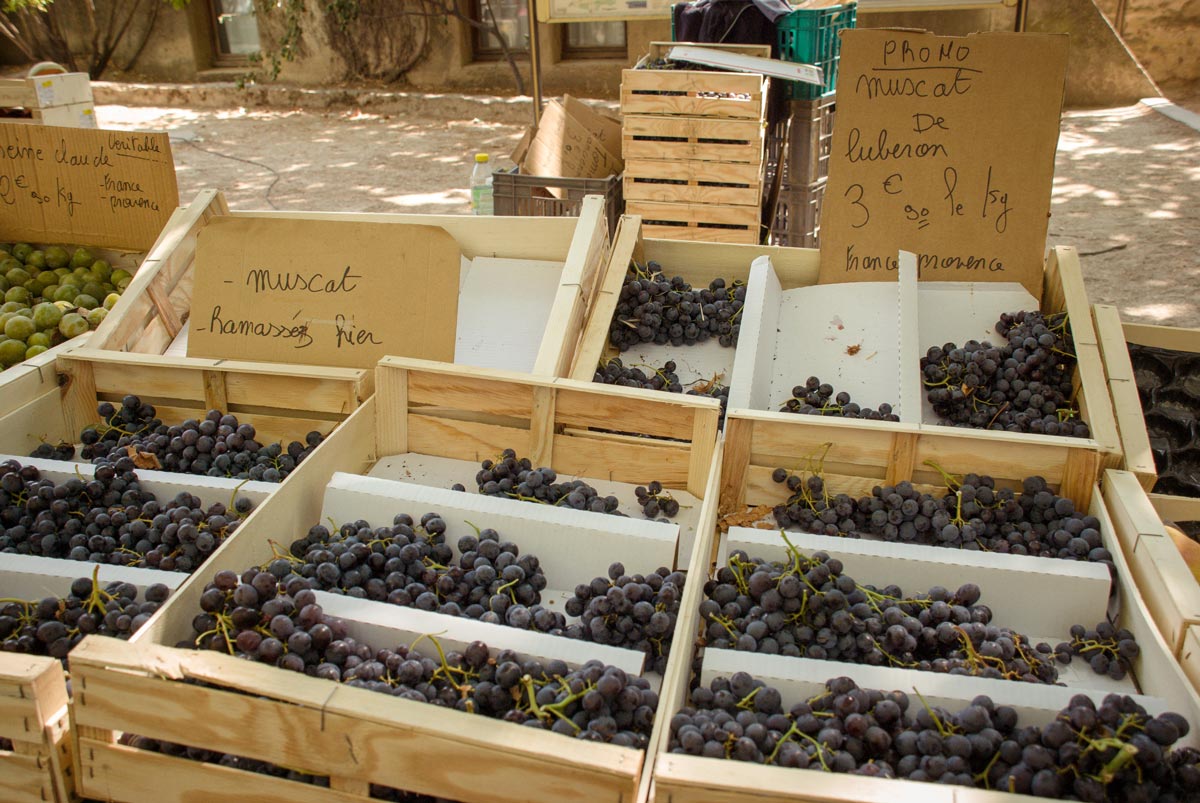 It’s a gorgeous place to just wander the streets, dip into local boutiques and immerse yourself in the café culture. People spill out of cafés onto shaded pavements and piazzas to drink in the ambience of this beautiful village (let’s be honest though, everyone is also drinking wine). 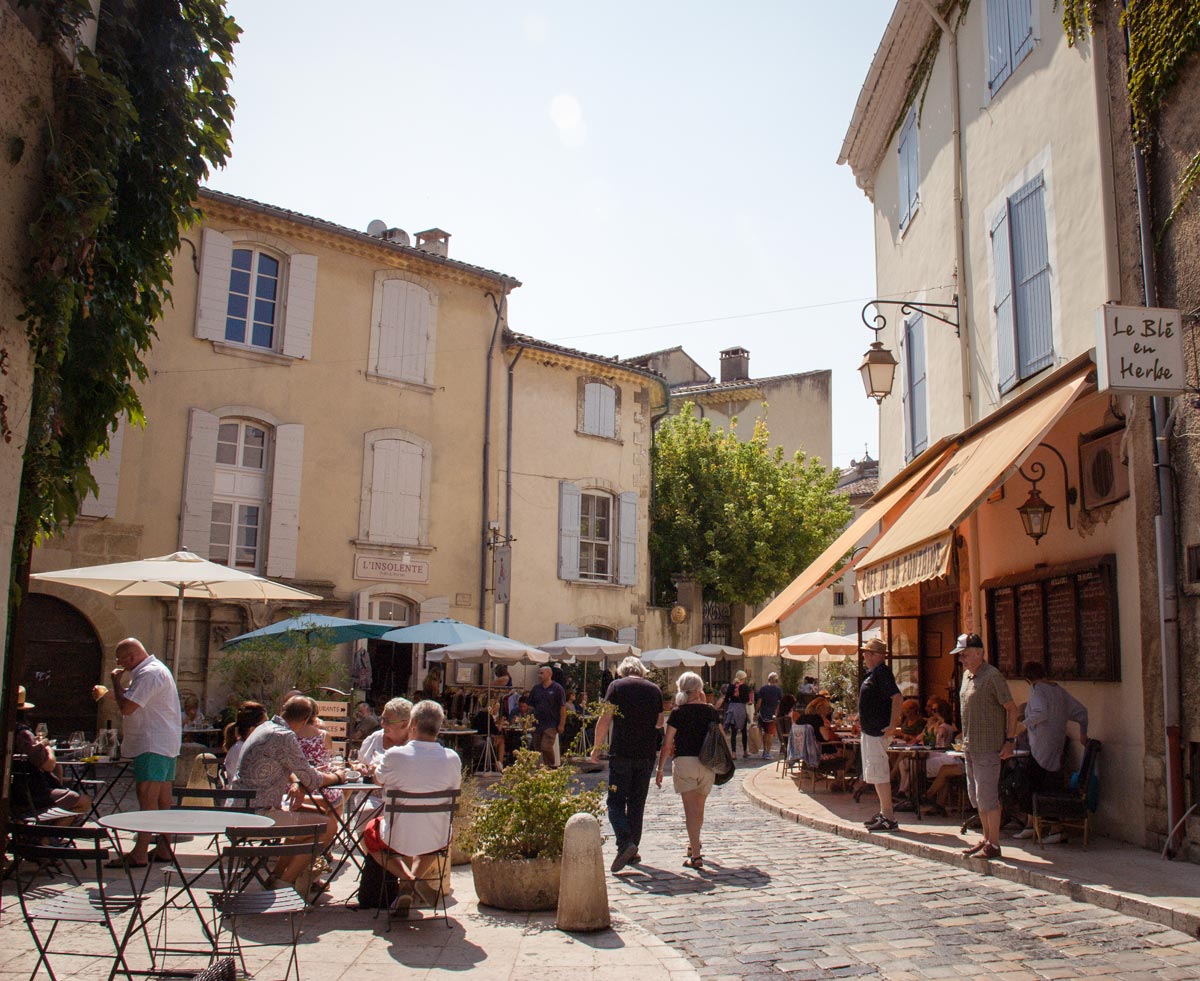 There’s also a castle which was originally a fortress in the 12th century. It was transformed into the chateau we see today with some Renaissance additions in the 15th century. 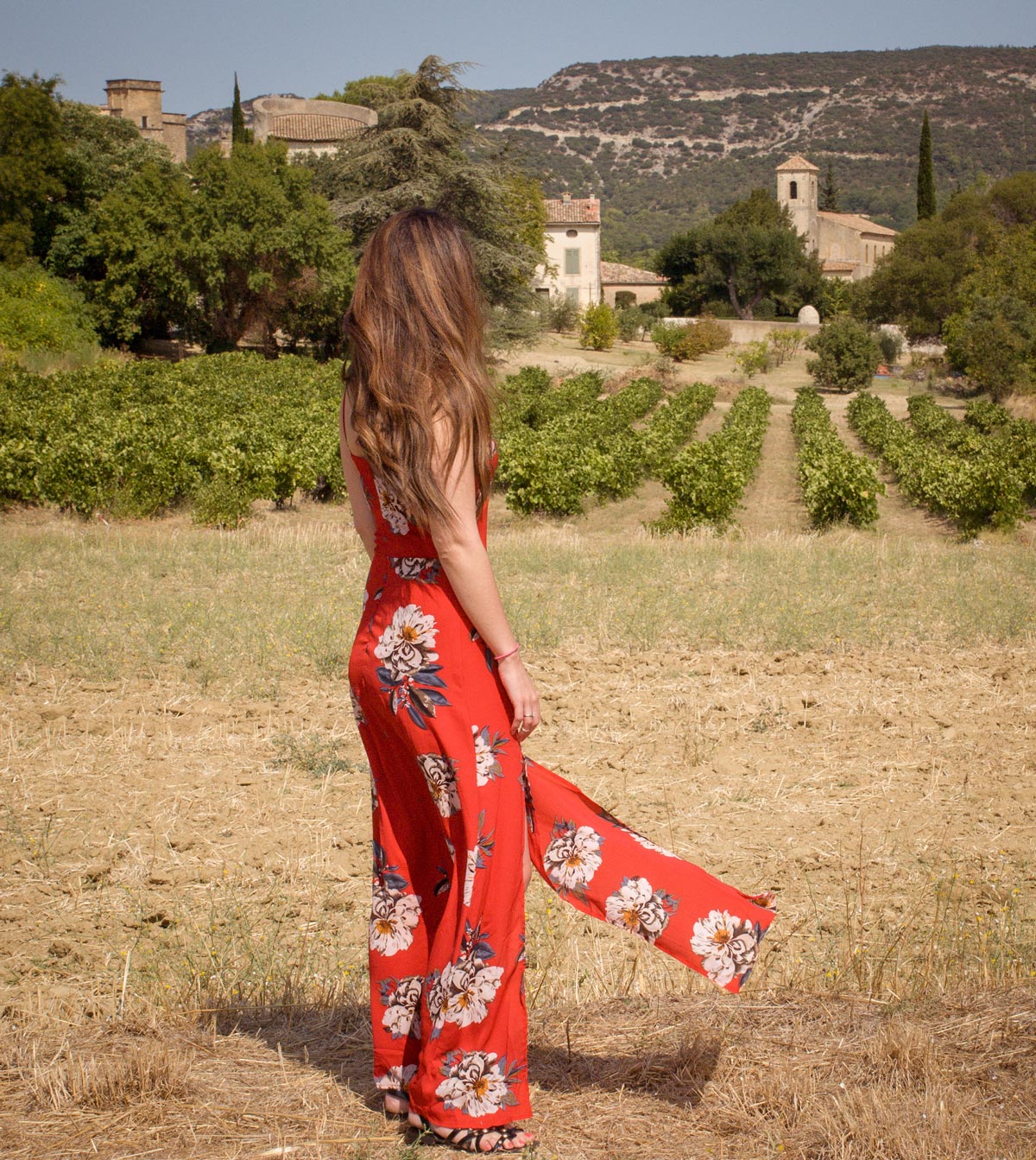 The French philosopher and winner of the Nobel Prize for Literature, Albert Camus, lived here. In fact, he’s buried in the Lourmarin cemetery. 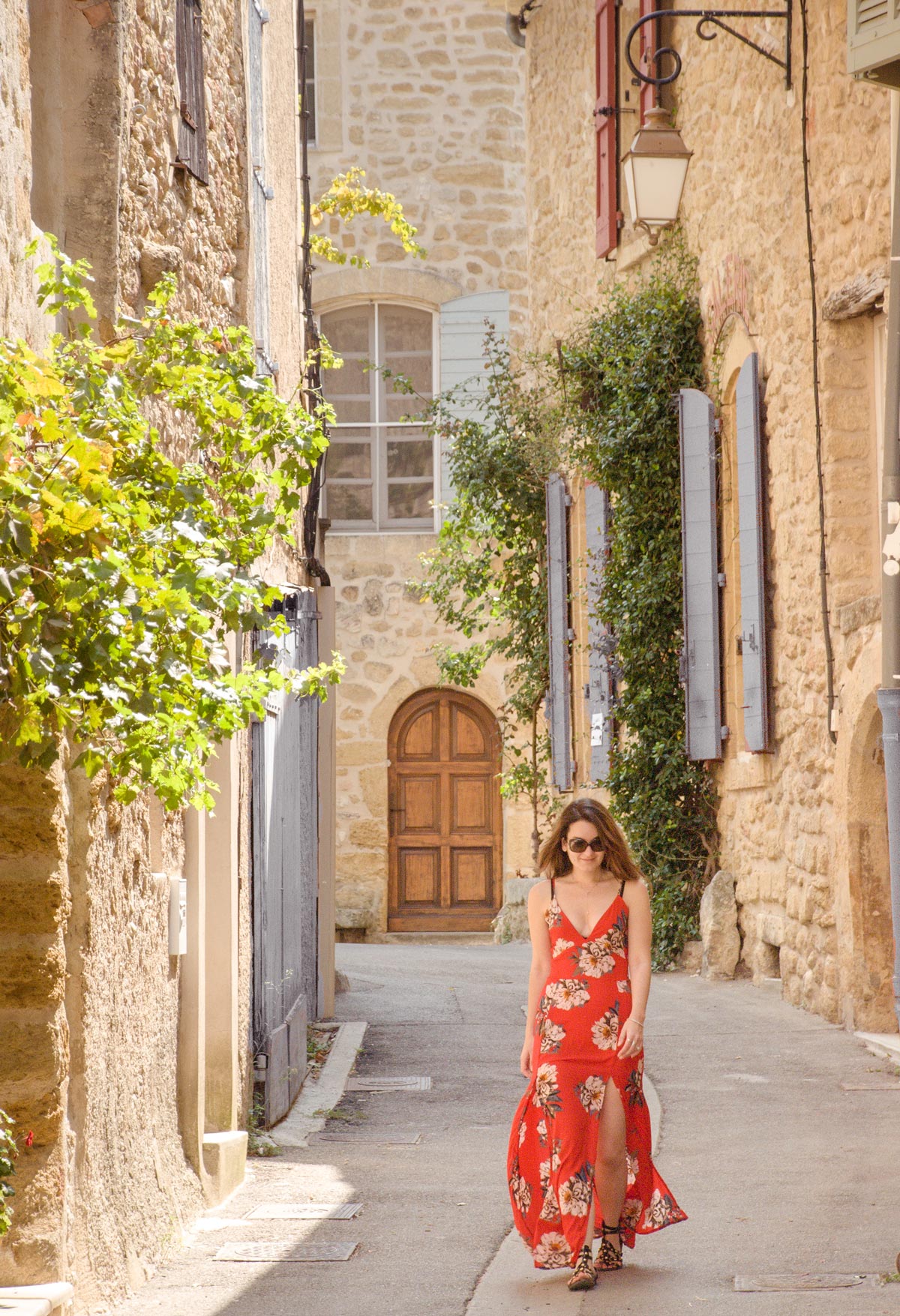 You might struggle to find parking in the village during busier periods (i.e. summer) so you can park on the side of road D27 and walk less than 5 minutes into town. You’ll see the castle and some vineyards from a different perspective here so it’s quite a nice place to stop. 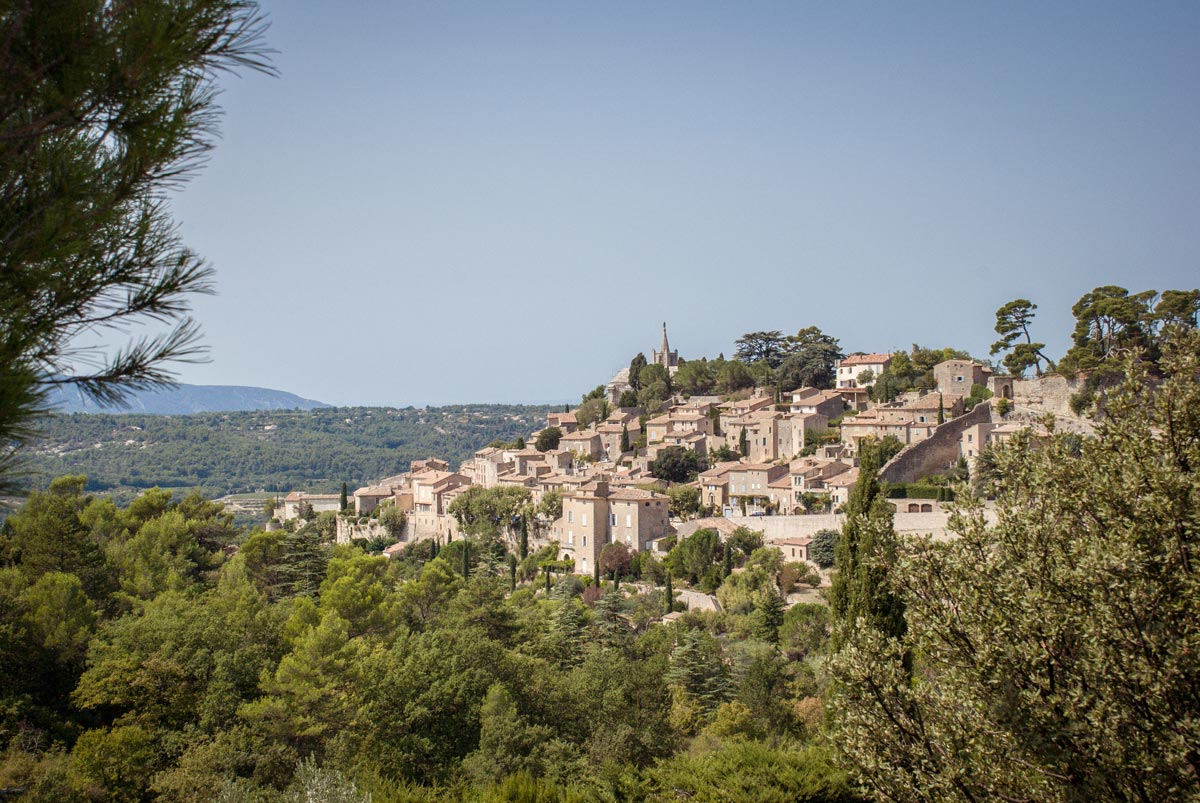 You’ll be stopped in your tracks when you see the stunning village of Bonnieux from a distance. Perched on the hillside and dating back to Roman times, the light stone buildings seem to glow in the Provençal sunshine. We stopped our car on the side of the road approaching the village to see it cascading down the hill in all its glory.

After appreciating the precarious perching from afar, we drove into the village to appreciate the view over the earth-toned rooftops to the vineyards and mountains beyond. 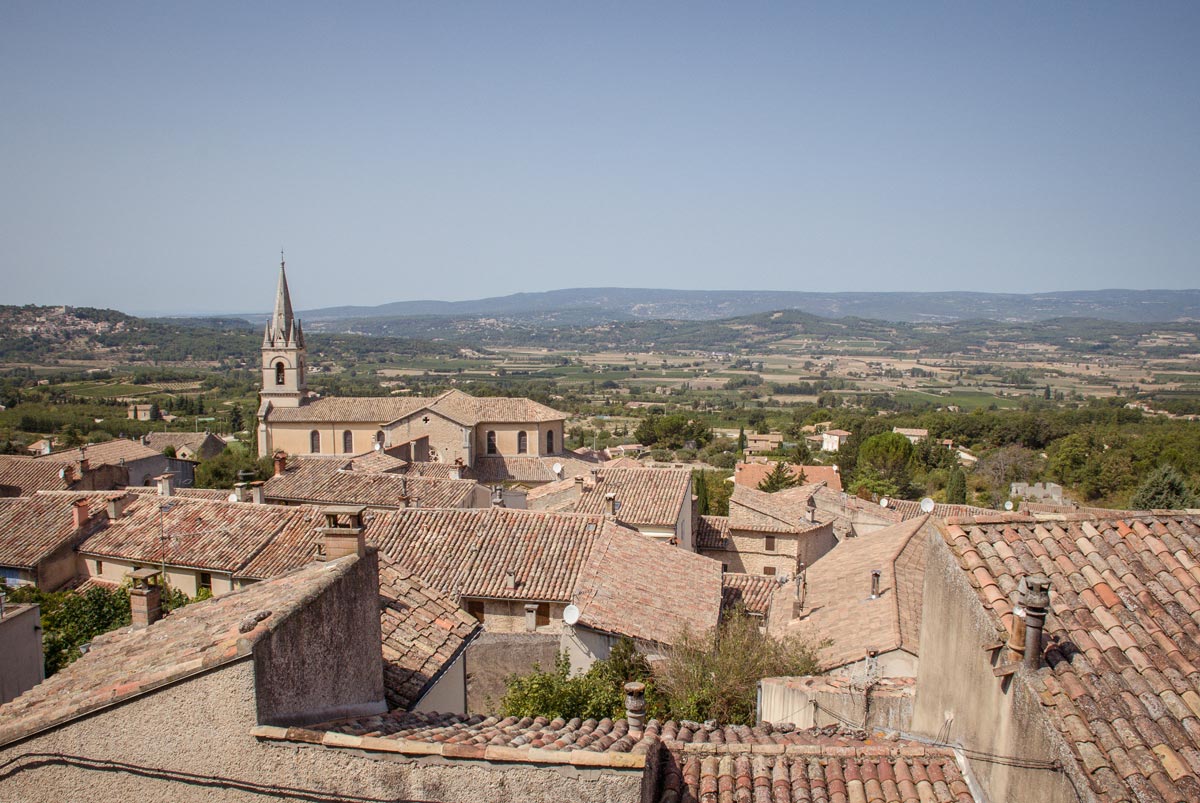 Bonnieux used to be a very wealthy village when this region, the ‘Comtat Venaissin” belonged to the Pope. Vast amounts of land in 1271 were bequeathed to the Holy See in 1291 when the Count of Poitiers died. The land remained under Papal control until a referendum in 1791 saw the inhabitants vote to take the land back. It was 23 more years before the Holy See formally recognised this. Beautiful 16th century buildings are a reminder of this wealthy time. 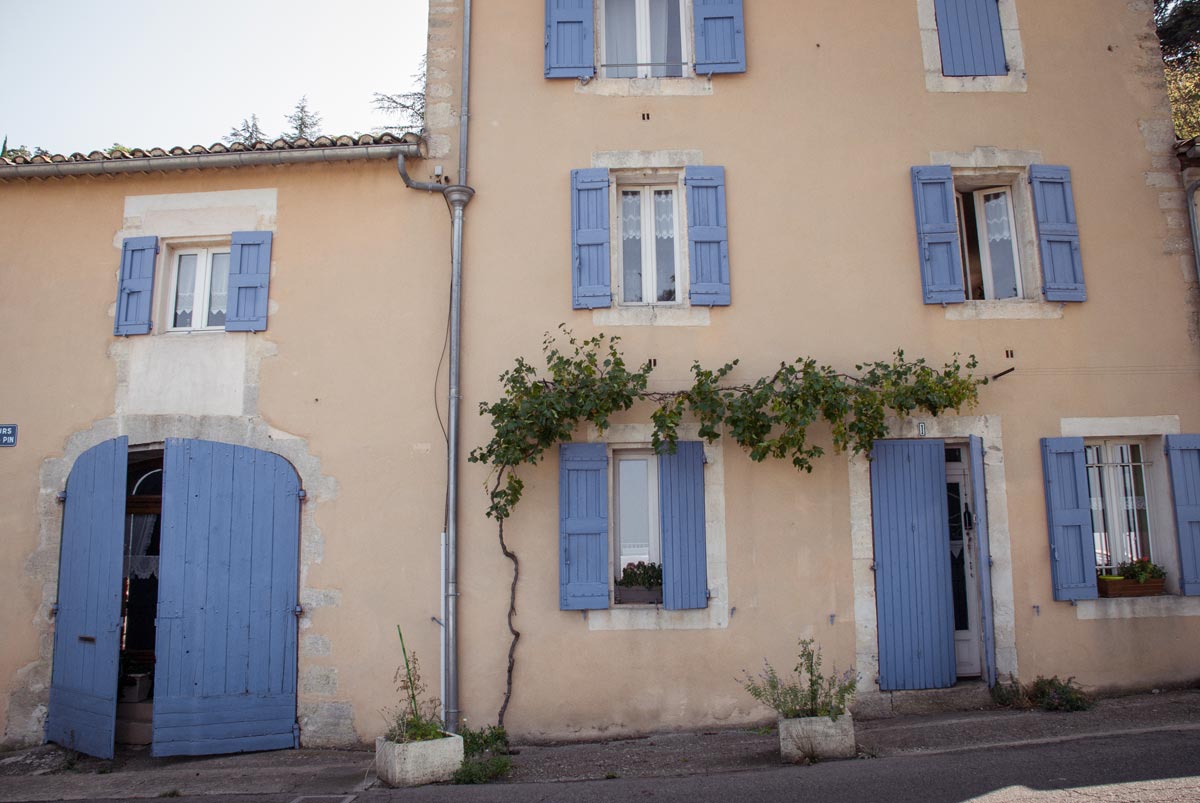 If you’re up for climbing the 86 stone steps to the Eglise haute, you’ll be surrounded by old cedar trees and have an unbeatable view of the Monts du Vaucluse and two villages you’ll visit later – Gordes and Roussillon. Views just like the impressionists painted! If you don’t fancy the walk, the view from the D3 road, which is slightly higher up, is incredible. 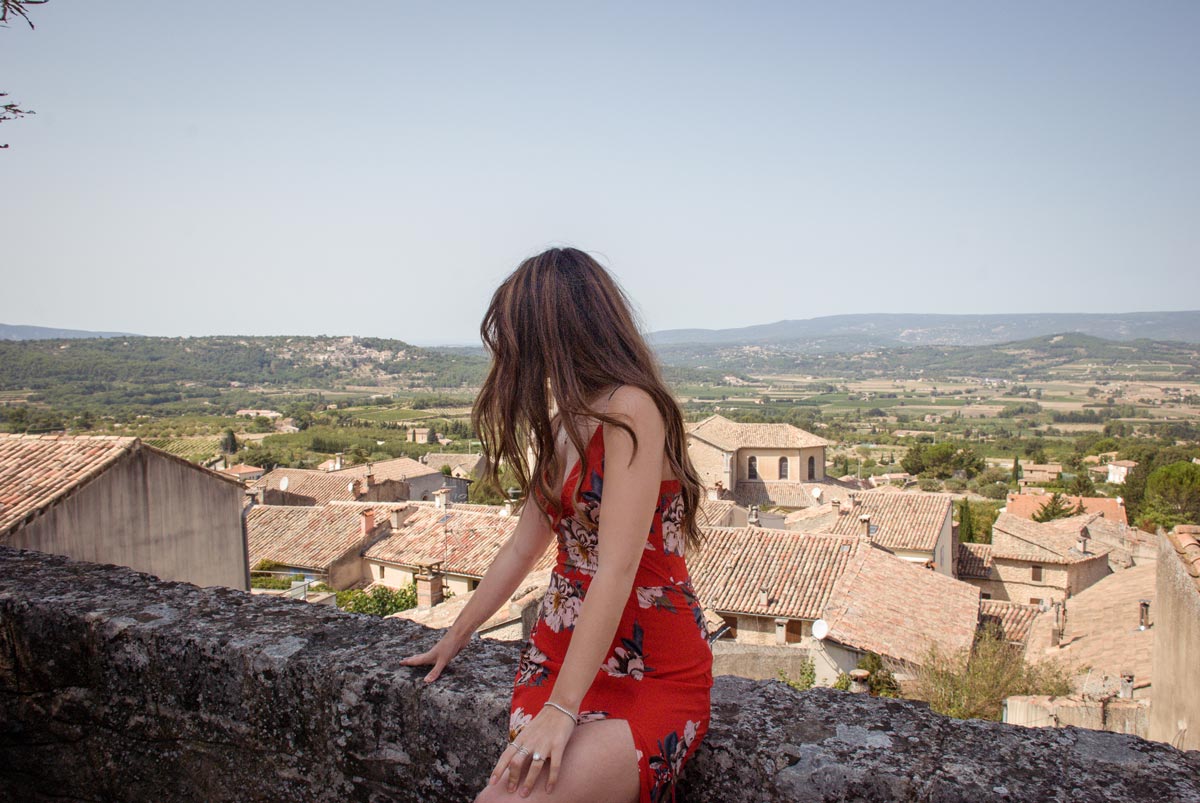 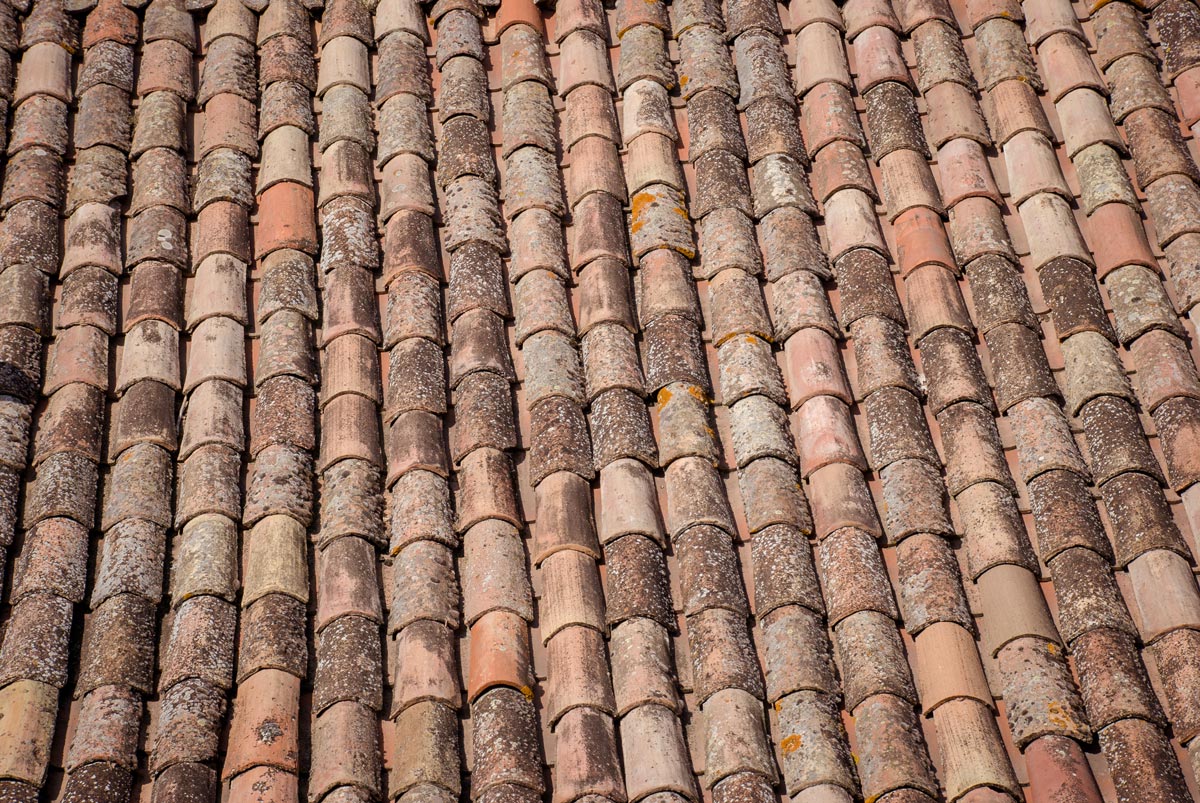 Before you leave, take a 15 minute drive down the road to Pont Julien. This Roman stone bridge over the river Calavon dates back to 3 BC(!) and was in use until 2005. So it was in continuous use for 2000 years! 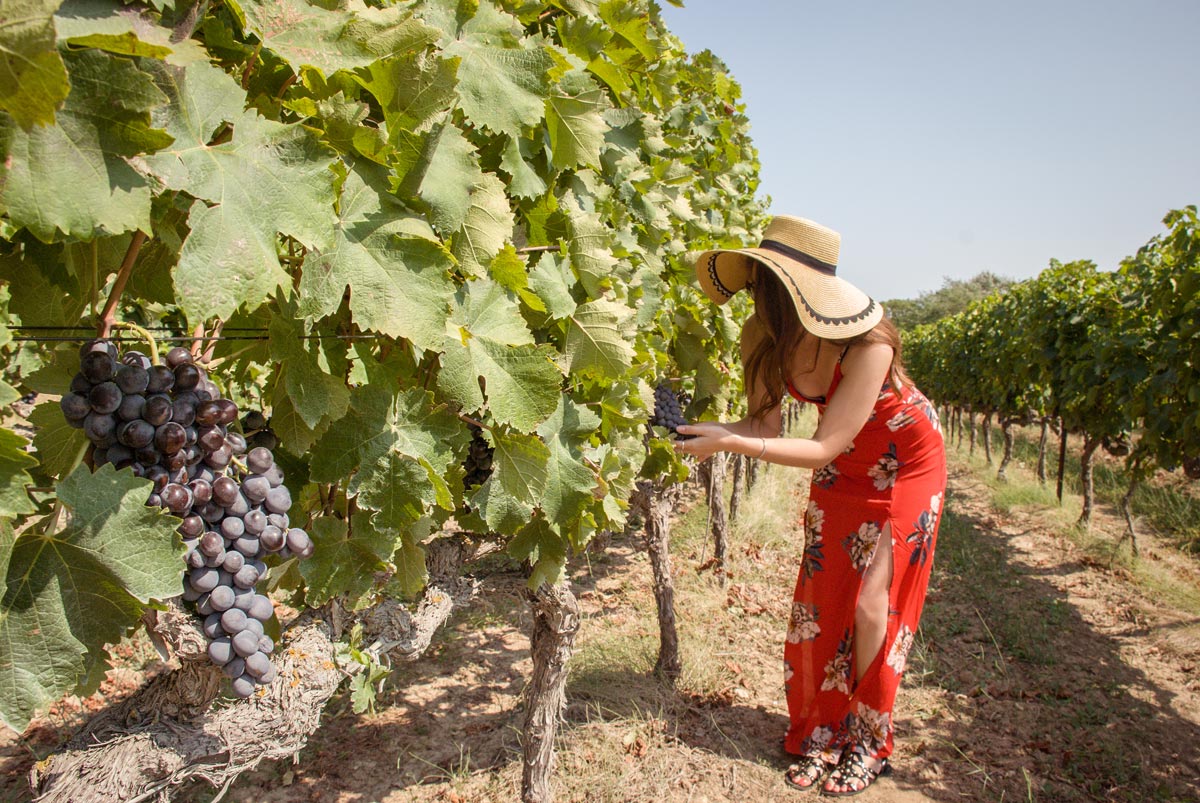 I added a sneaky stop because no trip to Provence would be complete without popping into a vineyard! Domaine de Marie is perfectly positioned en route from Bonnieux to the next stop, Ménerbes and is well worth stopping at.

The grapes straight off the vine were unlike anything I’d tasted. They were ultra juicy and had a depth of flavour that instantly helps you understand why their wine is so delicious. If you enjoy the wine a bit too much and don’t think getting back in the car is a good idea, they also have accommodation by way of the chic Bastide de Marie. 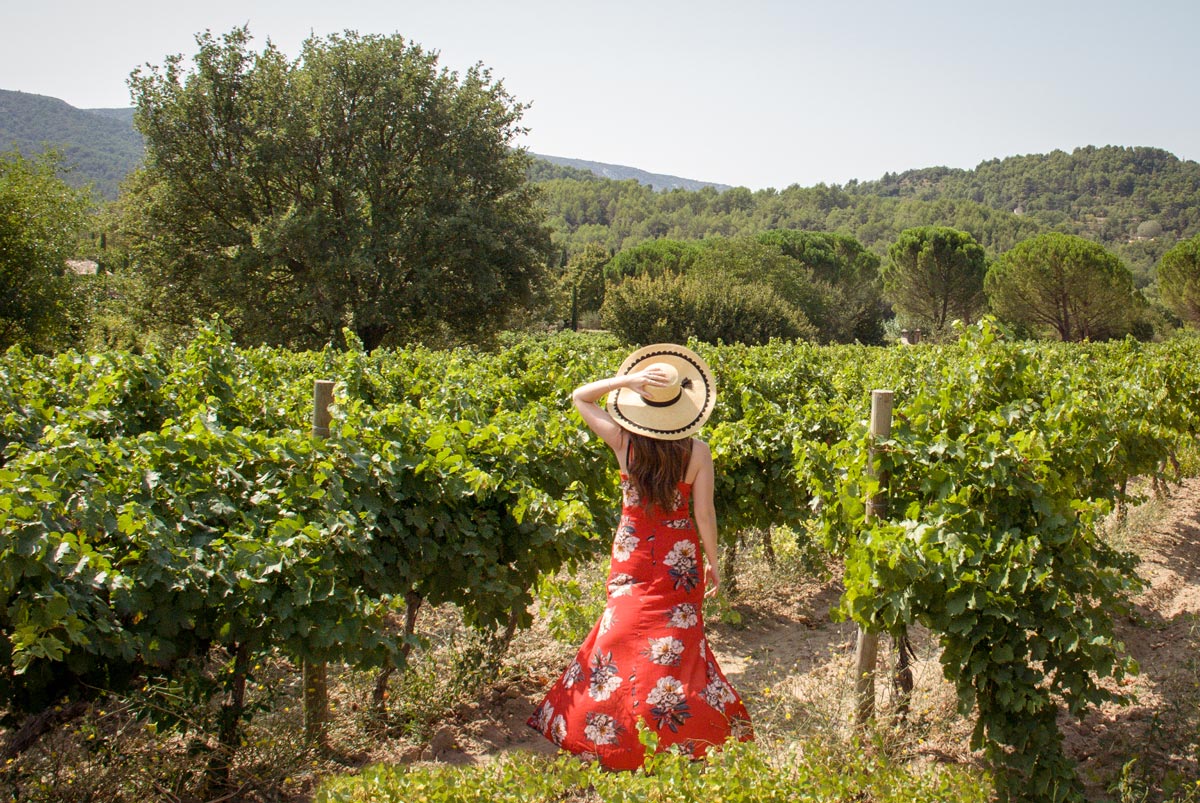 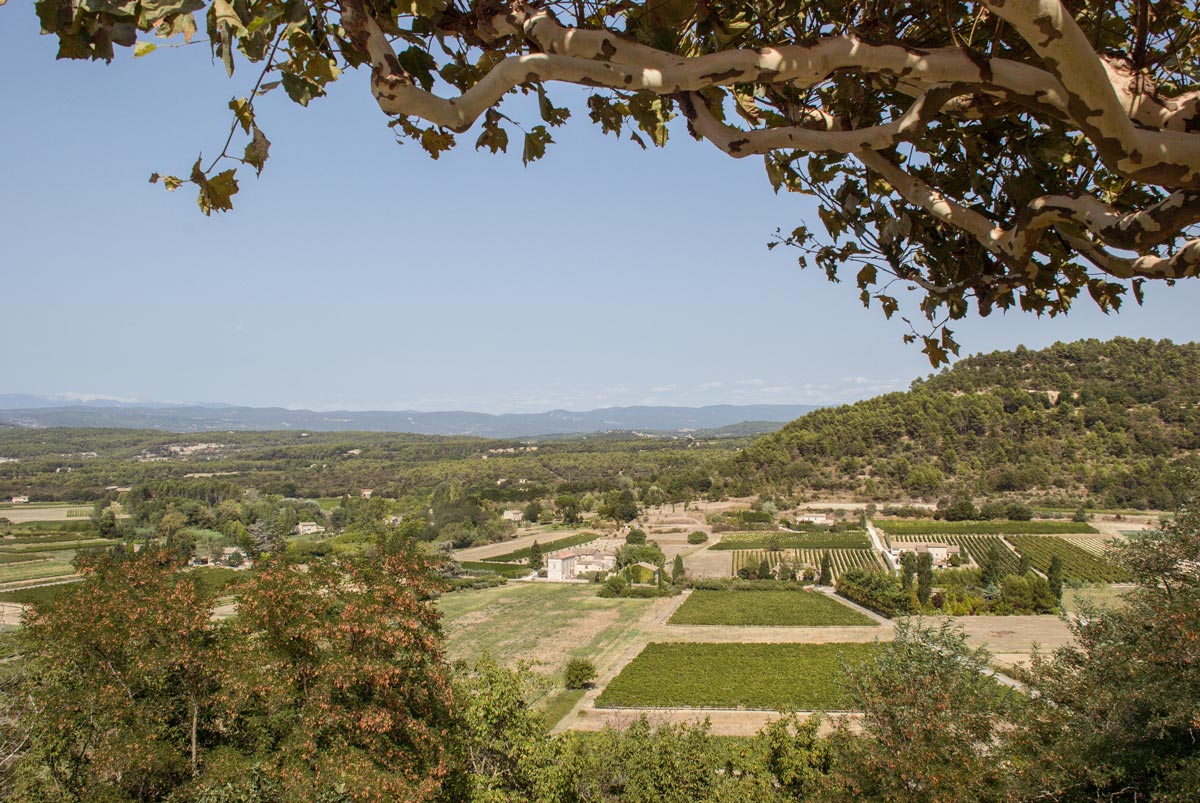 The walled village of Ménerbes built on a hilltop in the Luberon mountains is so well preserved. You’d never know it was a fierce battleground! The citadel apparently took more than 900 hits by cannonballs and over 14 tons of lead bullets during the Religious Wars at the end of the 16th century. 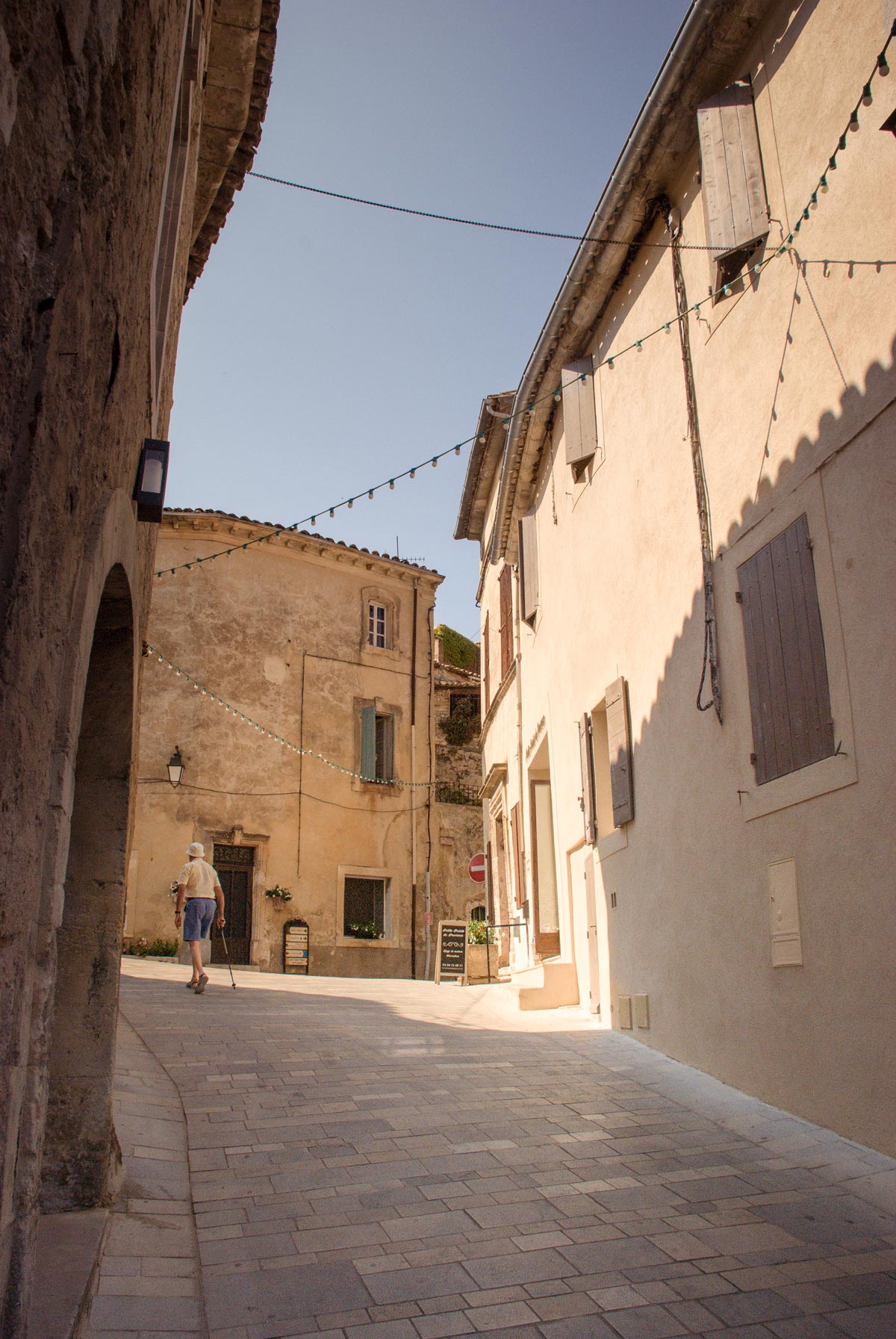 Picasso once lived here as did Peter Mayle who wrote the book A year in Provence, which put Provence villages on the tourist map. 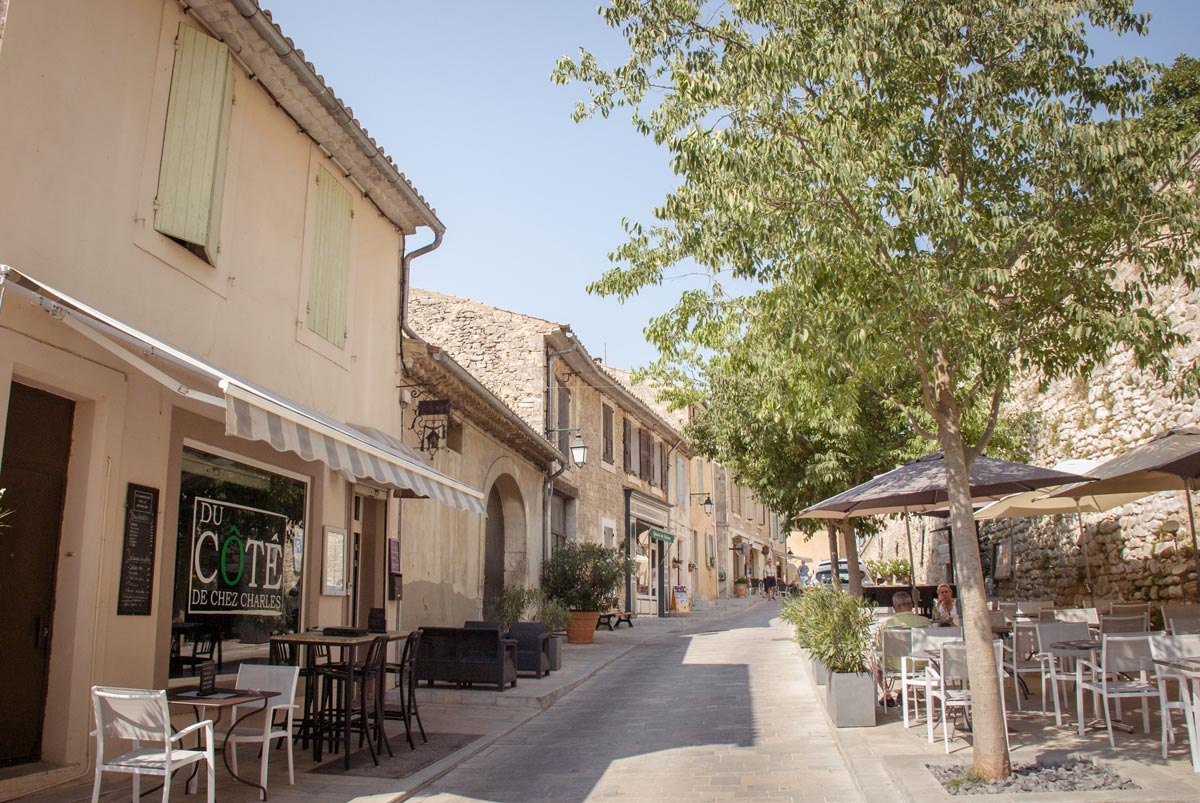 You can wander the village streets here quite quickly so we had a quick look around and then went on the hunt for food! We stopped at Bistrot le 5 (on 5 Place Albert Roure) for a chilled glass of Rosé as it’s the ideal spot to stop and enjoy the view. The food looked delicious but we were so excited to keep exploring that we went in search of something quick instead. Visit the boulangerie on Avenue Marcellin Poncet for pain au chocolat (flaky buttery chocolate heaven) and a hot slice of pizza if you’re keen to get back on the road. 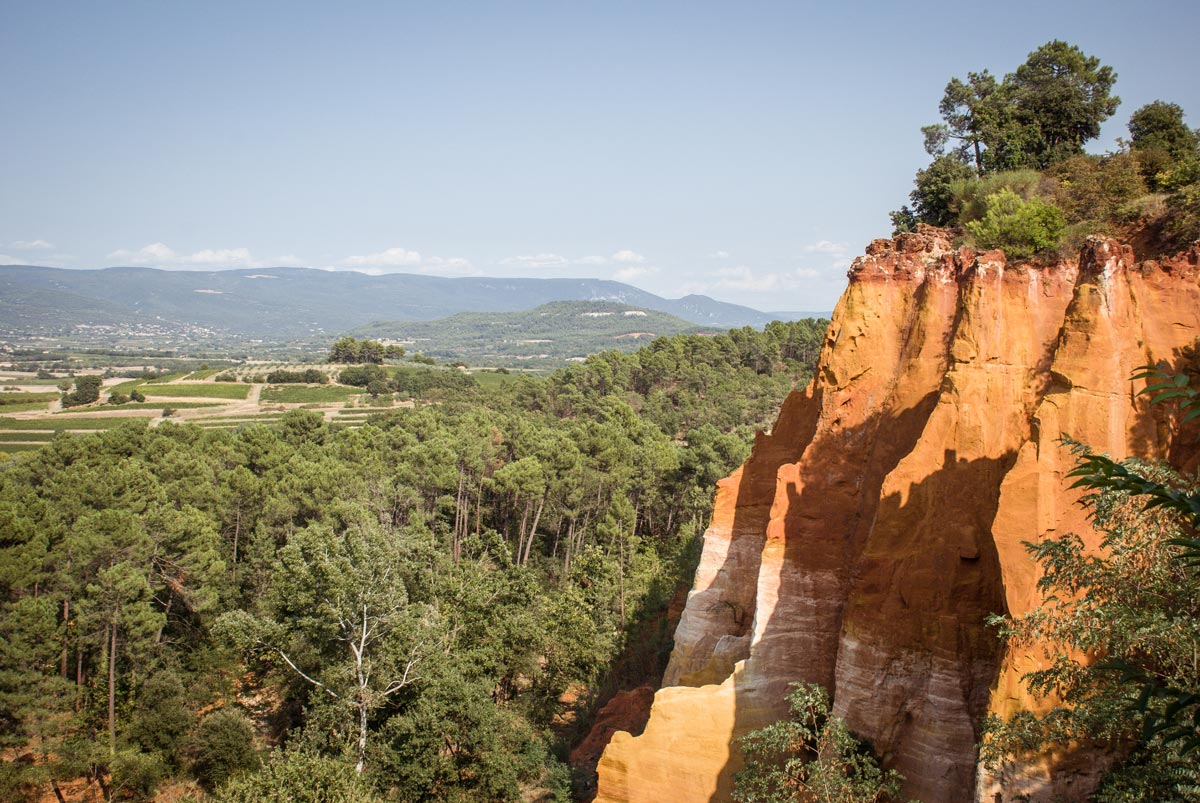 Roussillon in the Luberon National Park is famous for its striking red cliffs. It’s situated at the heart of one of the biggest ochre deposits in the world and is one of the ‘must visit’ Provence villages. You can’t miss the cliffs – their red edges jutting out flamboyantly into the pallette of hazy Provencal greens and blues. We enjoyed the view and cooled down with some ice cream before wandering through the picturesque maze of streets. The ochre facades are gorgeous, contrasted with painted doors and shutters. 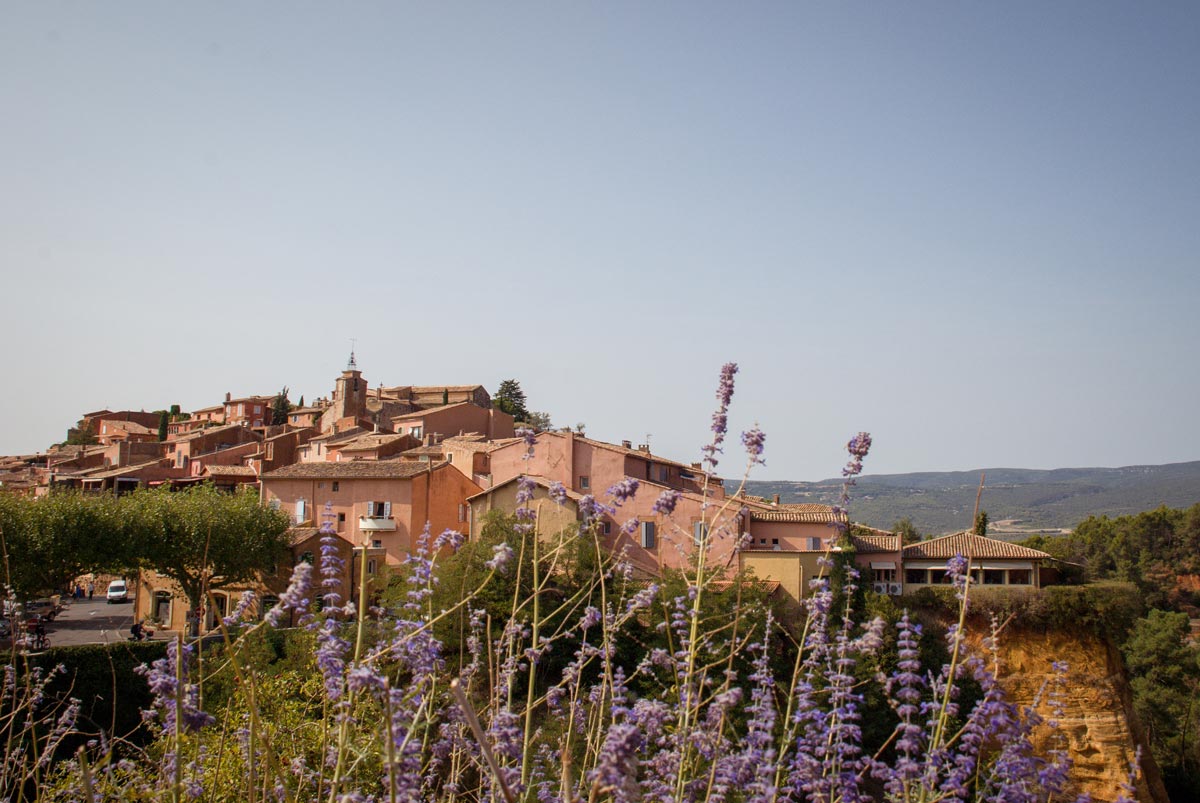 Unlike the light stone houses we’d seen in other Provence villages, the homes here are coloured with ochre pigment leading to a pretty mix of warm shades. Ochre is a natural earthy pigment extracted from clay which ranges in colour from yellow, to brown and red. Quarries nearby were in use for almost 200 years and employed thousands of people to satisfy the textile industry’s demand for pigments. By around 1930 modern mining techniques led to more profitable ochre mines elsewhere and the Roussillon mines closed down. Now mining here is prohibited to protect the crimson cliffs from being destroyed. 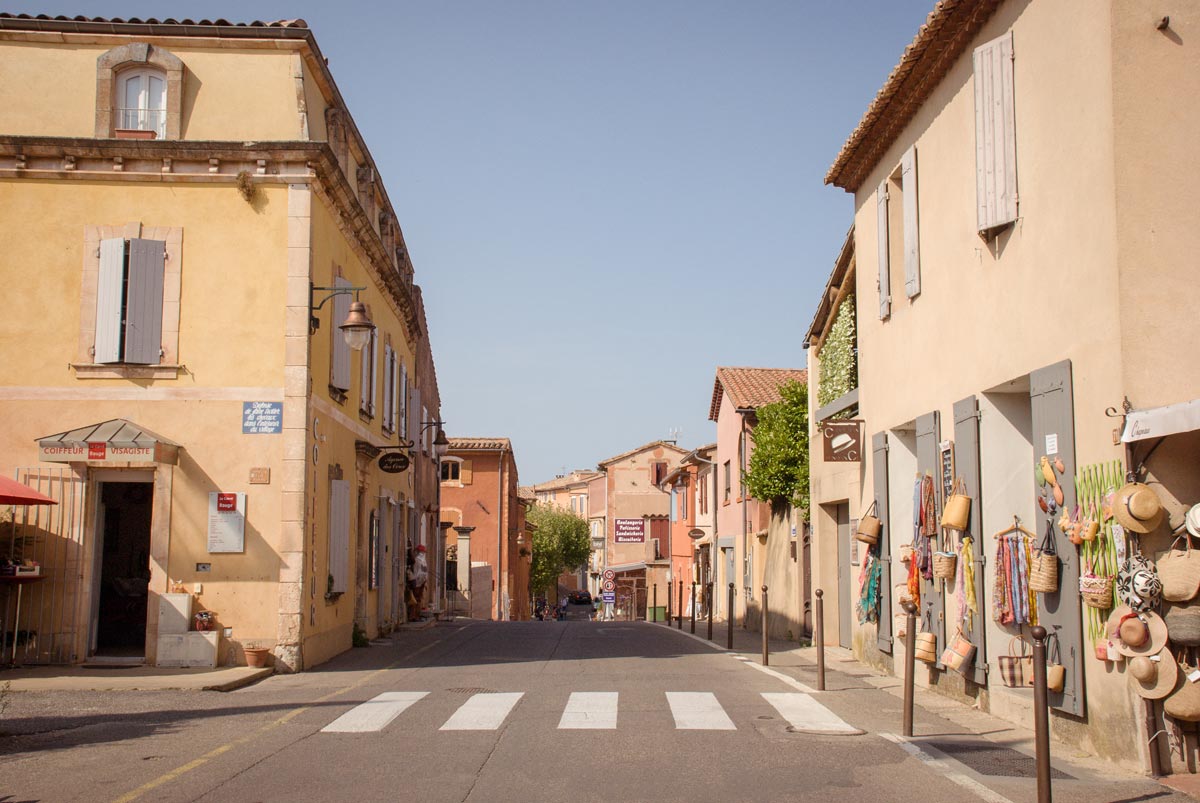 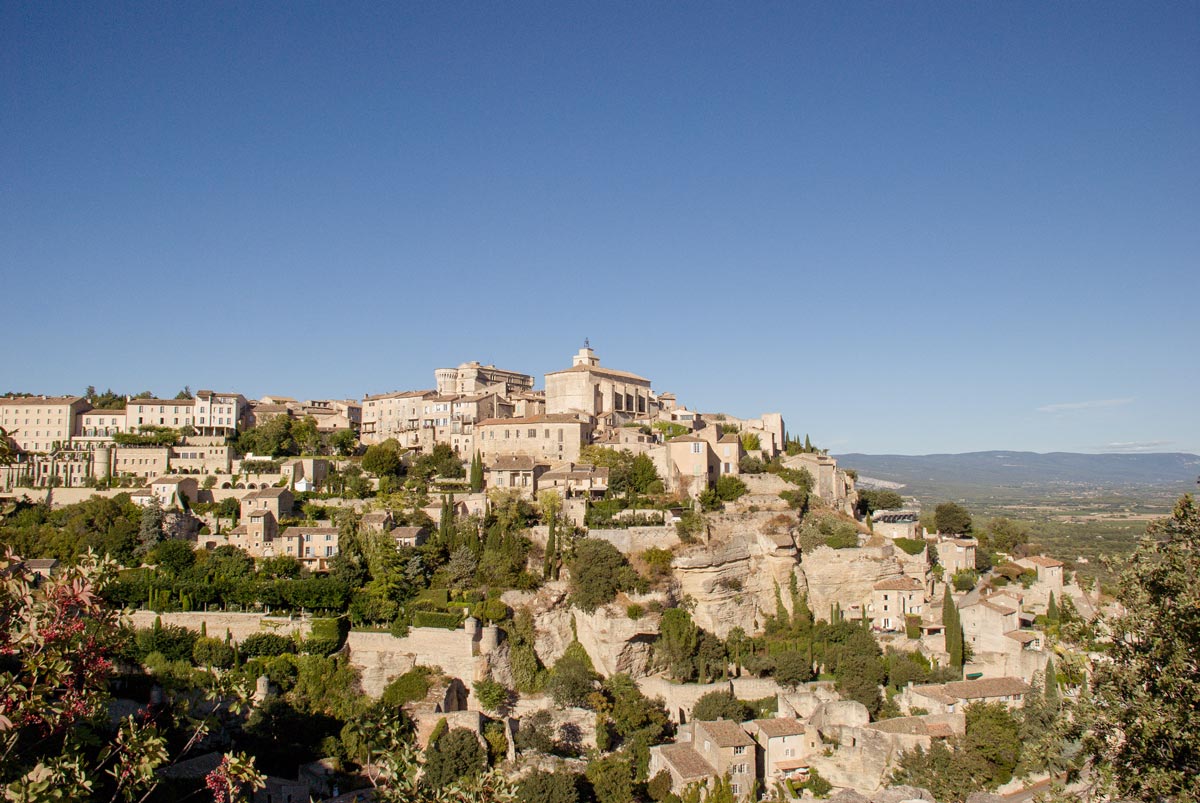 Gordes is officially one of the most beautiful villages in France, and probably my favourite of all these Provence villages. Approaching past towering Cypress trees and pristine stone walls gives you an indication of what lies ahead. Gordes is a hilltop village where the light stone houses dramatically perch on the cliffside. Inside the village itself are calades (narrow cobbled streets), a castle with parts dating back to 1031, beautiful facades, and the most luxurious hotel which is classified as a palace. 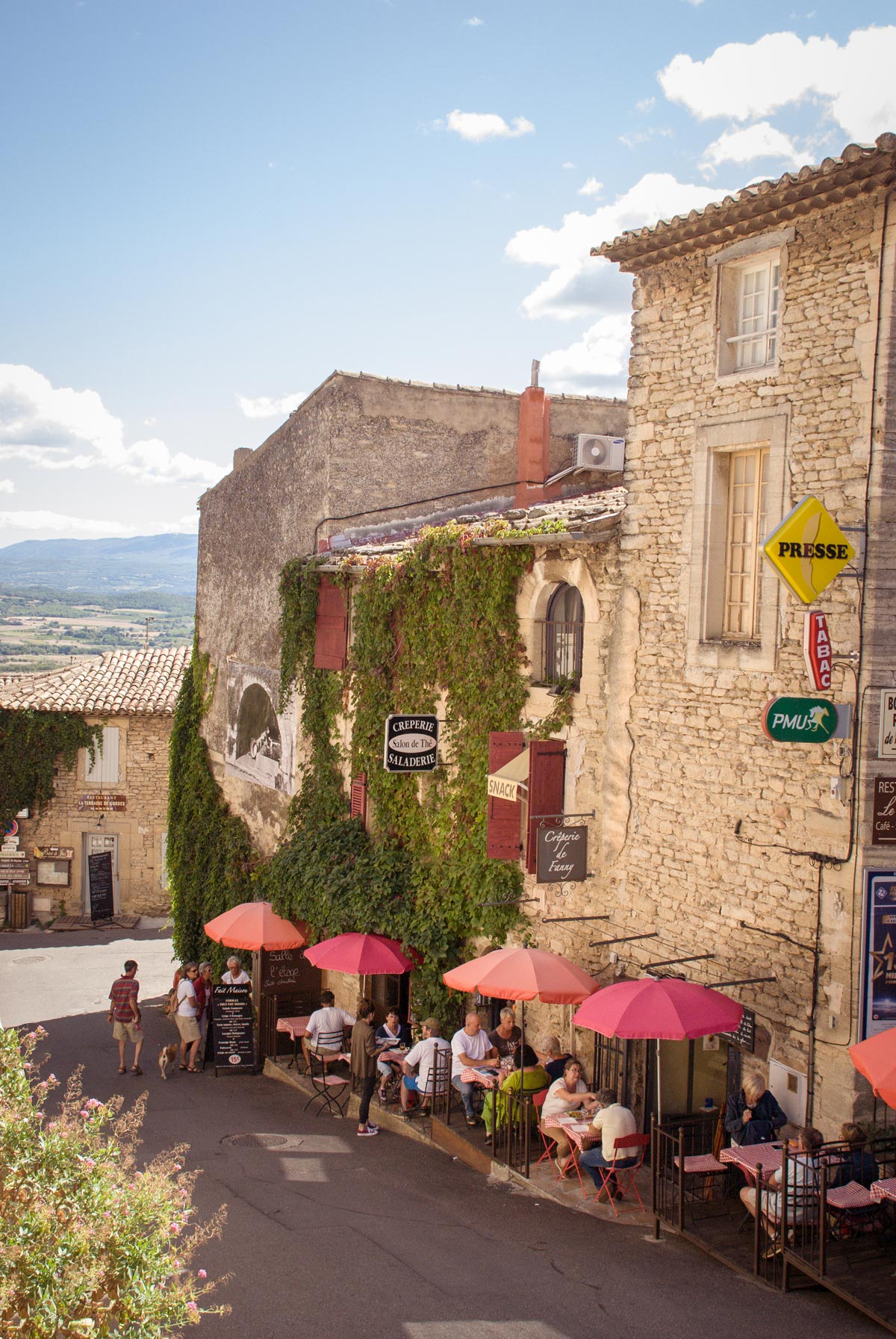 24 French hotels hold the classification of palace, and you can totally see why La Bastide de Gordes is one of them. Their pool is stunning with perfect views over the valley below. Their breakfast comes with oysters (if you can stomach them first thing?!) and a 3 metre dessert table of dreams! Crème brûlée, raspberry macarons and lemon cheesecake for breakfast should be the norm to be honest… 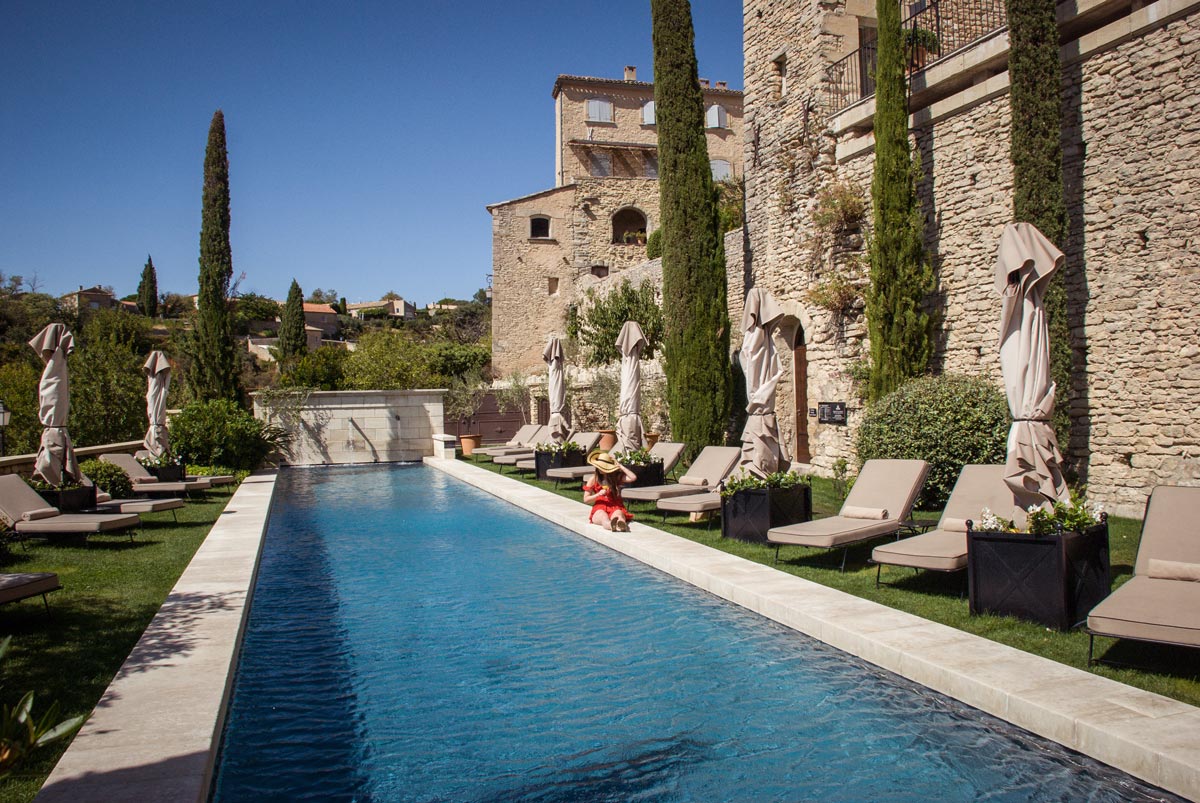 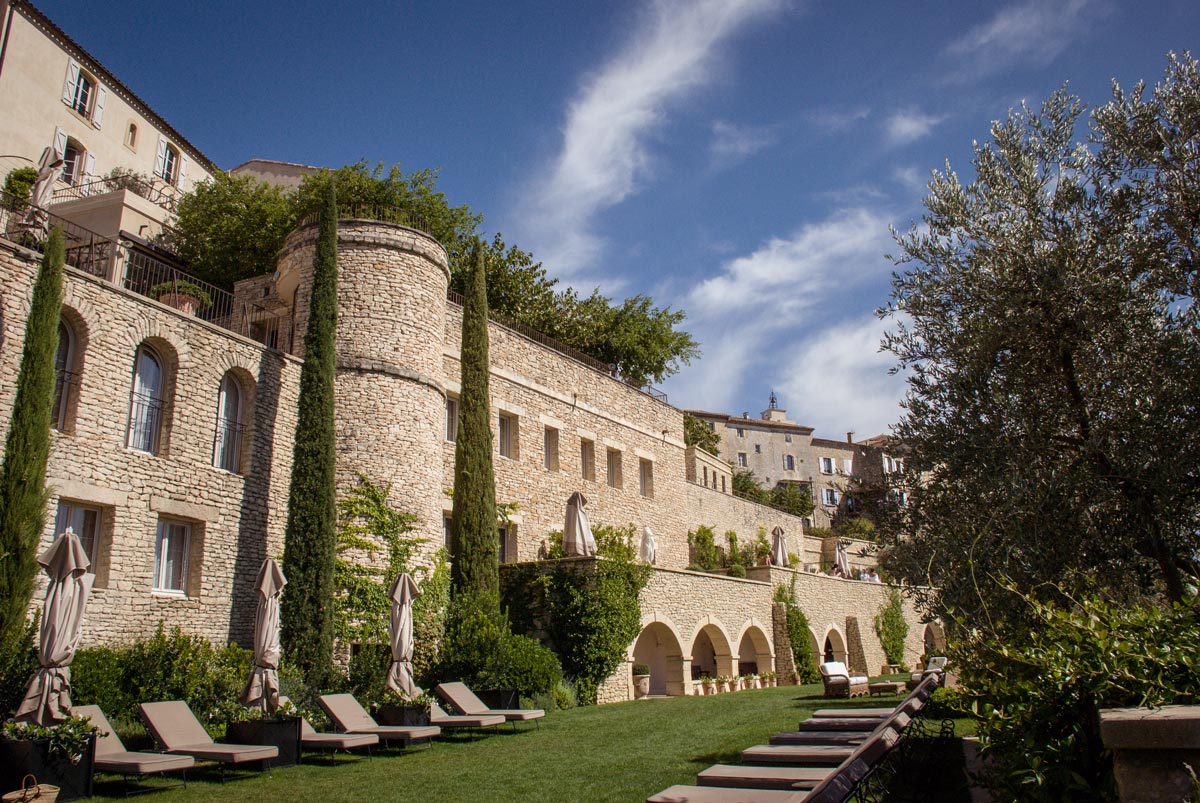 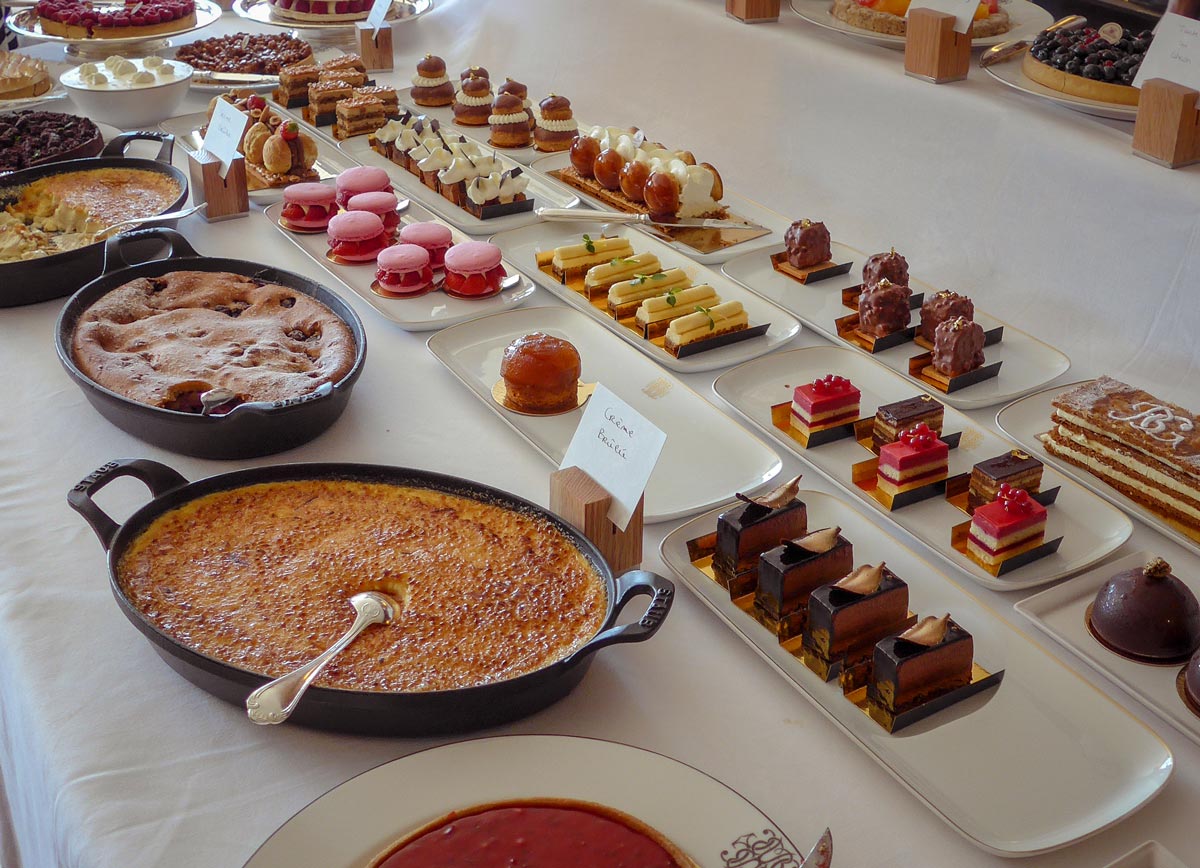 In the valley below the village is the Abbey of Senanque. Cistercian Monks produce lavender essence, honey and liqueurs for visitors to buy while they look around the 12th century buildings and little lavender field. 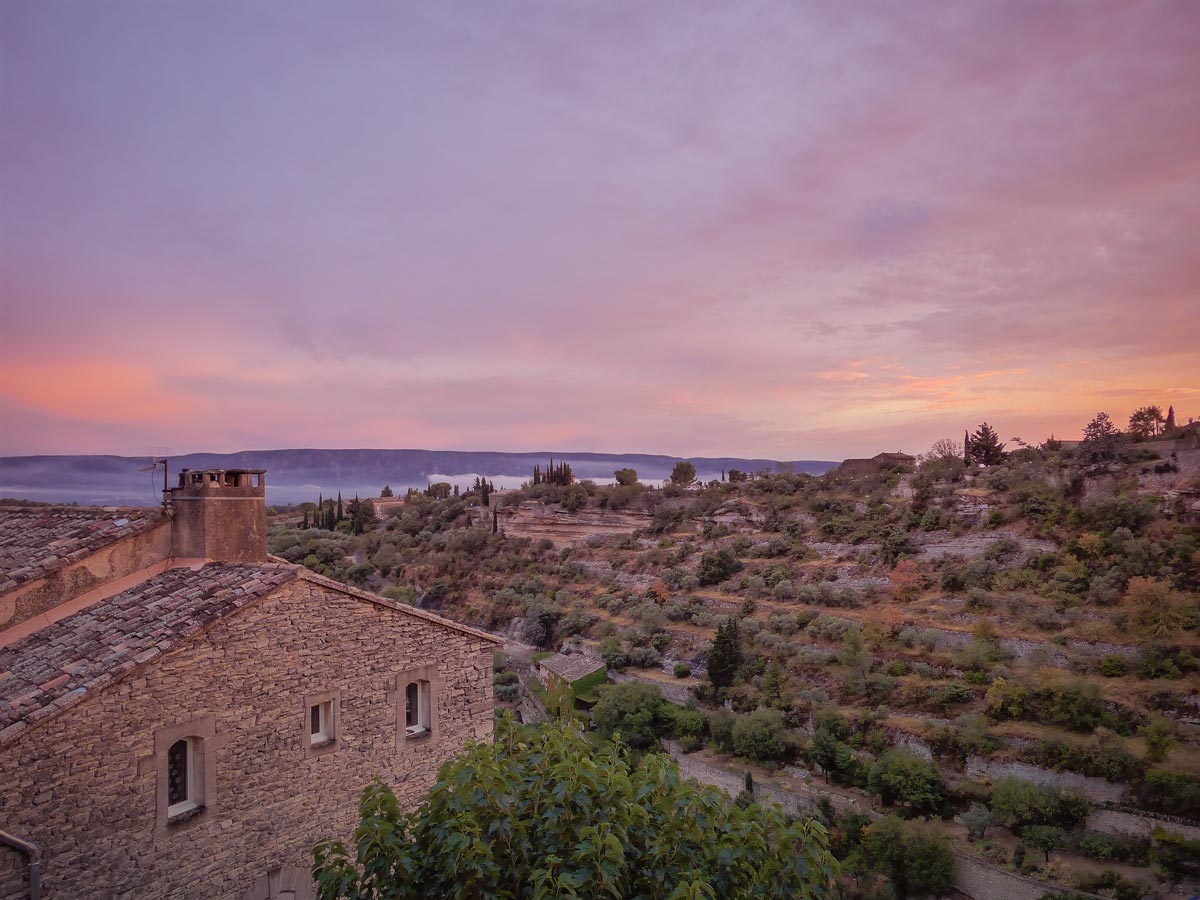 If you end your trip in Gordes it’s worth staying at the exquisite La Bastide de Gordes or at Le Mas des Herbes Blanches, in nearby Joucas. Gordes is also a good base from which to explore more Provence villages and find your own favourites!