I heard about this new Peruvian place called Chicama that was due to open on the King’s Road. They have a no meat approach, instead focussing on delicious, innovative seafood and vegetable dishes, which are edible works of art. The thought of the freshest fish driven up from Cornwall every day had me booking a table for an impromptu date night with the Mr. immediately!

Chicama is the latest outpost from the team behind Pachamama in Marylebone. The dishes are dreamed up by head chef Erren Nathaniel who has previously delighted diners at Maido, Peru’s top Nikkei restaurant and the 44th best restaurant in the world according to San Pelegrino’s list. He has also worked his way around some of the most fabulous kitchens in London including Launceston Place, Viajante, Hélène Darroze at The Connaught and 28:50.

We booked a table on the terrace where we sat in the sun with cocktails and pored over the menu. 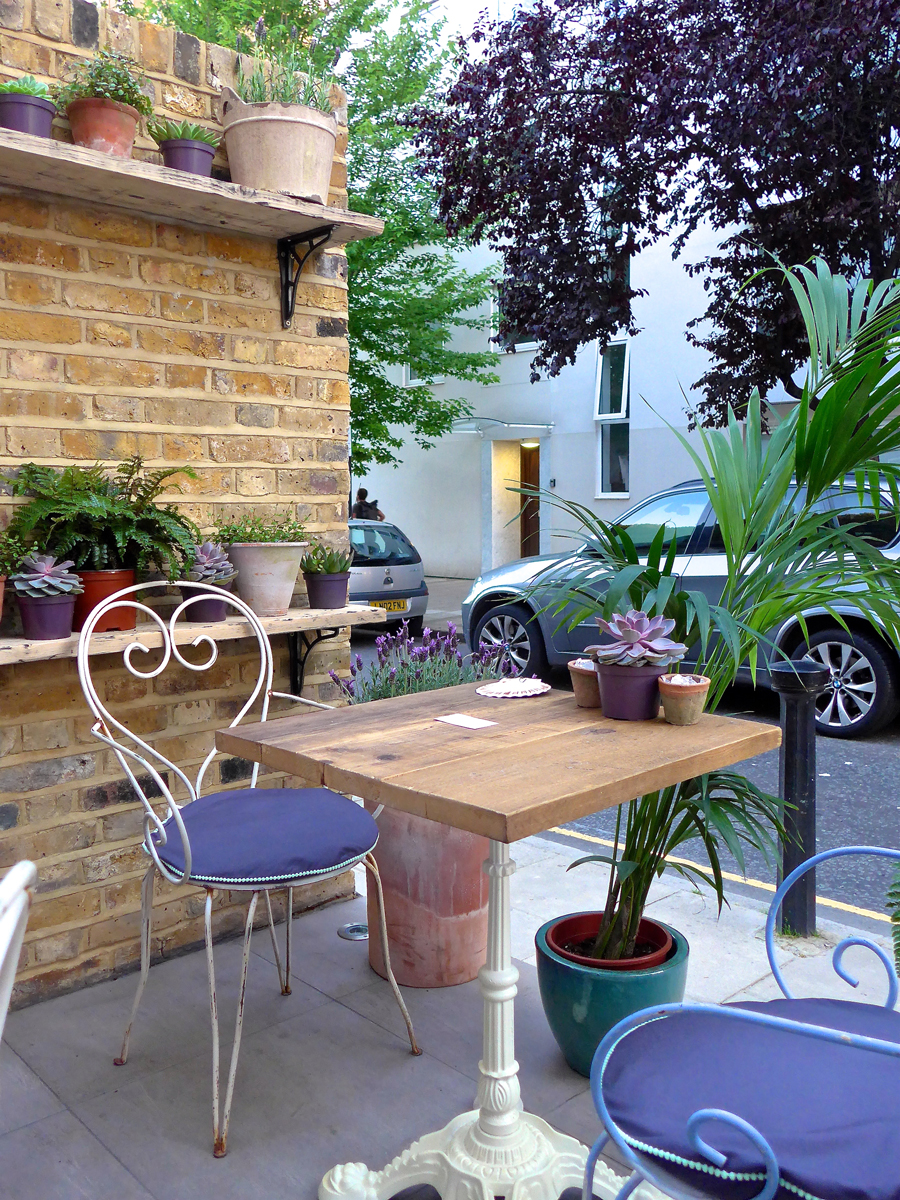 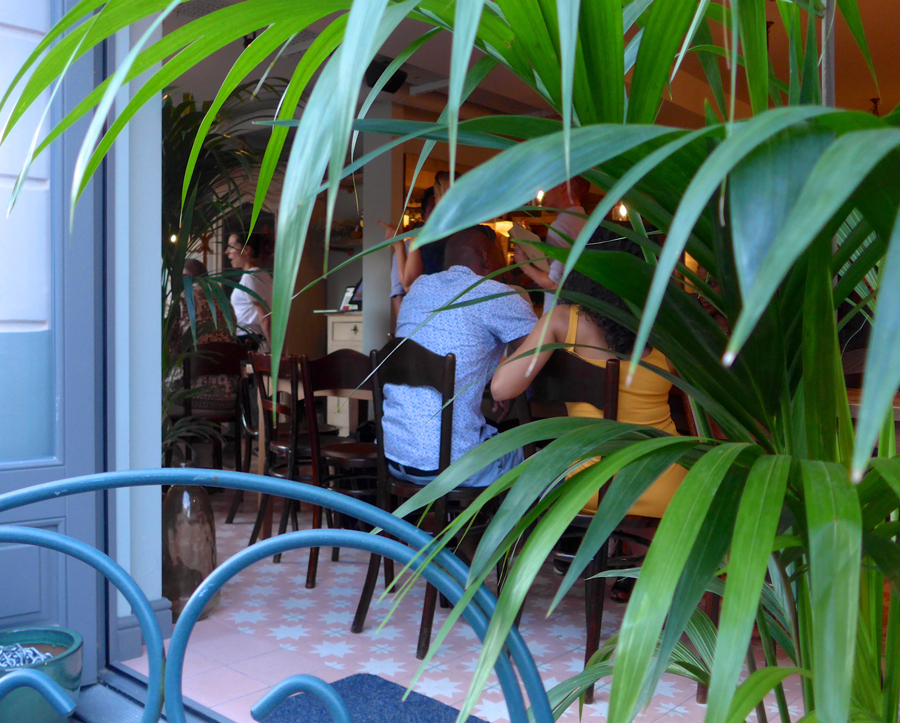 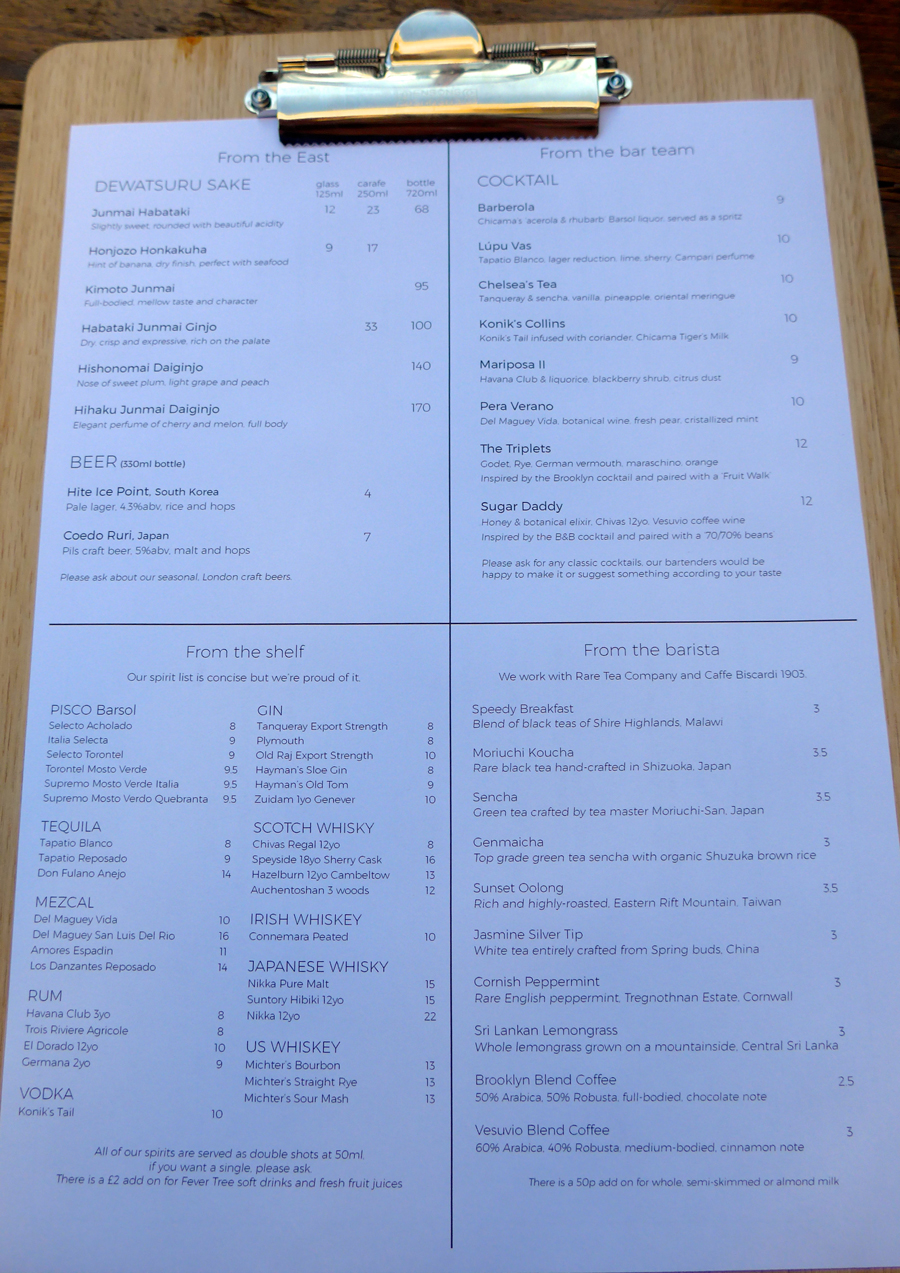 The Barberola cocktail was dangerously delicious and came with a smattering of orange sugar on the outside of the glass. It’s made with Barbados cherry & rhubarb Pisco, a brandy produced in the wine making regions of Peru and Chile. It’s one of those drinks that tastes like juice and you wonder whether it actually has any alcohol in it… until you stand up! 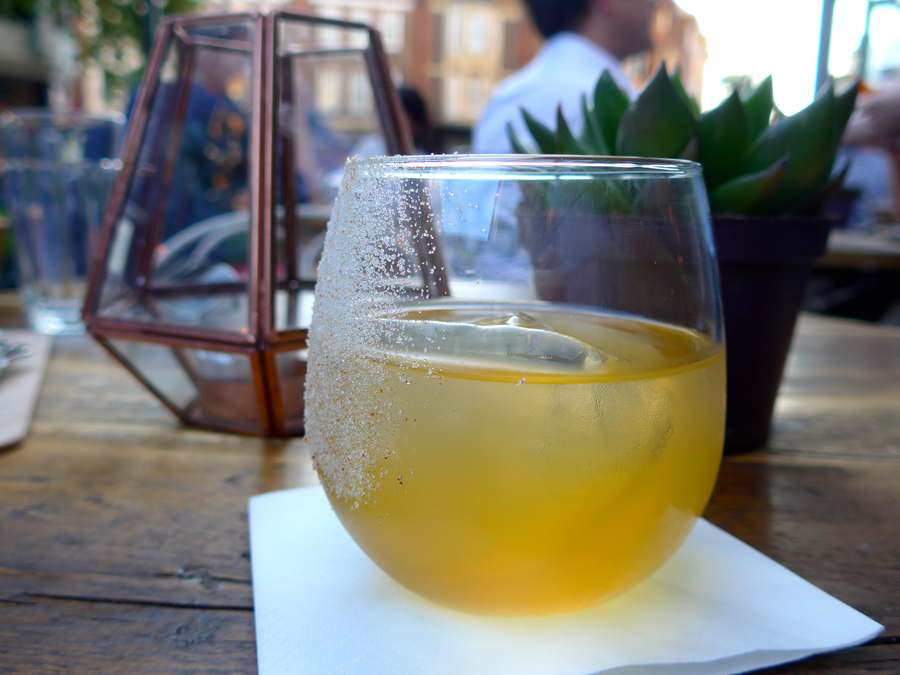 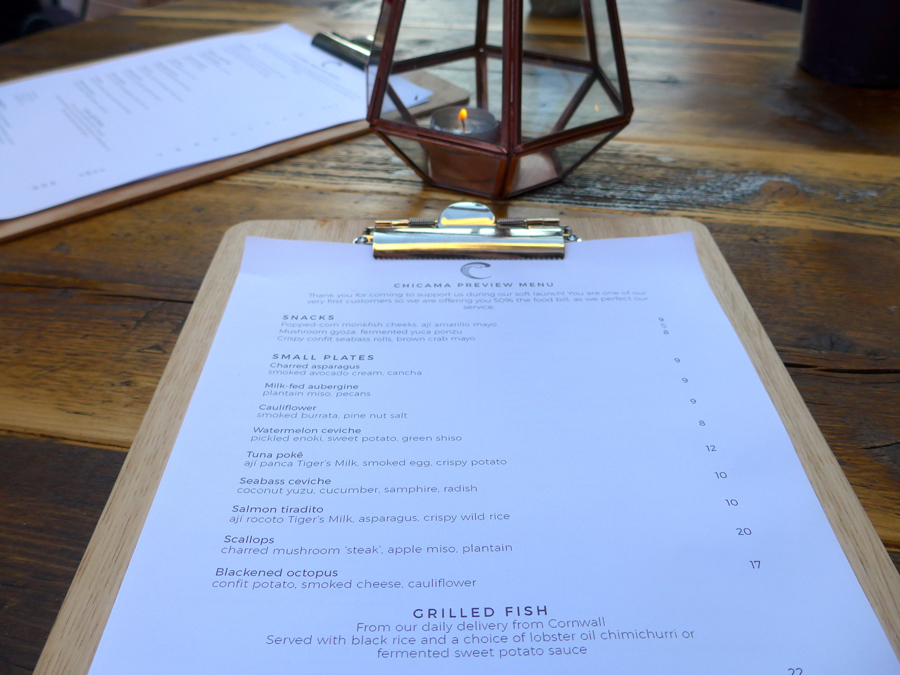 We wanted to try everything, not helped by all the tasty looking dishes being ferried back and forth to all the surrounding tables! So we ordered lots of small plates to share but larger ‘daily catch’ dishes are also available. 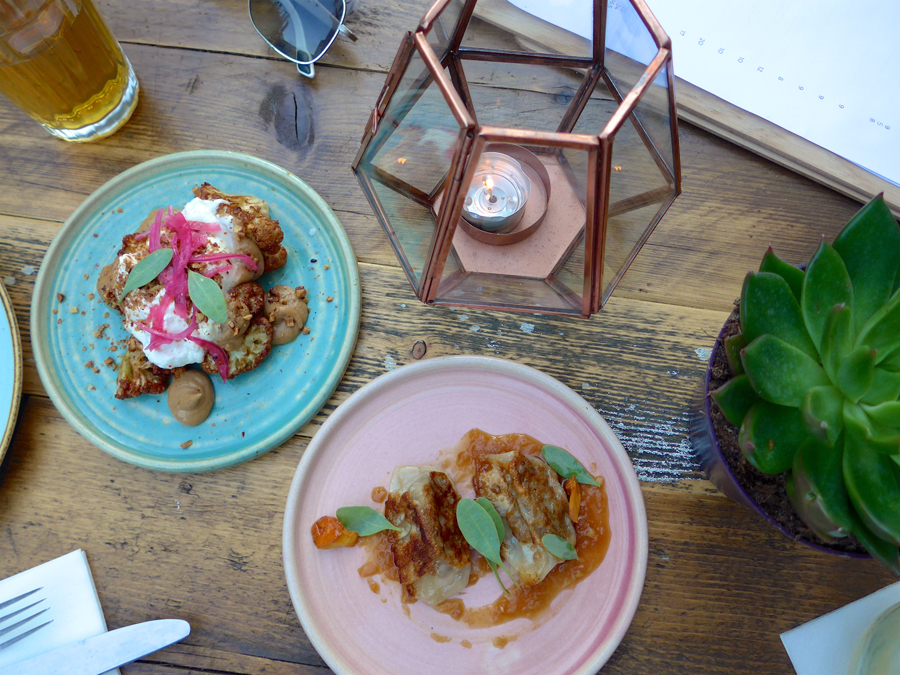 We started with cauliflower covered in the creamiest smoked burrata and pine nut salt, and mushroom gyoza with fermented yuca ponzu. 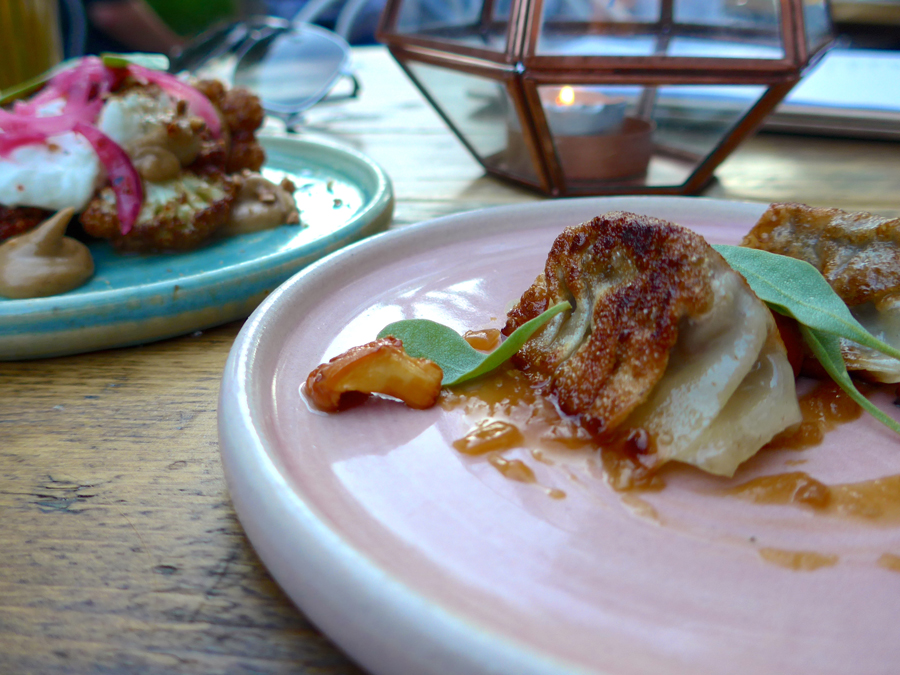 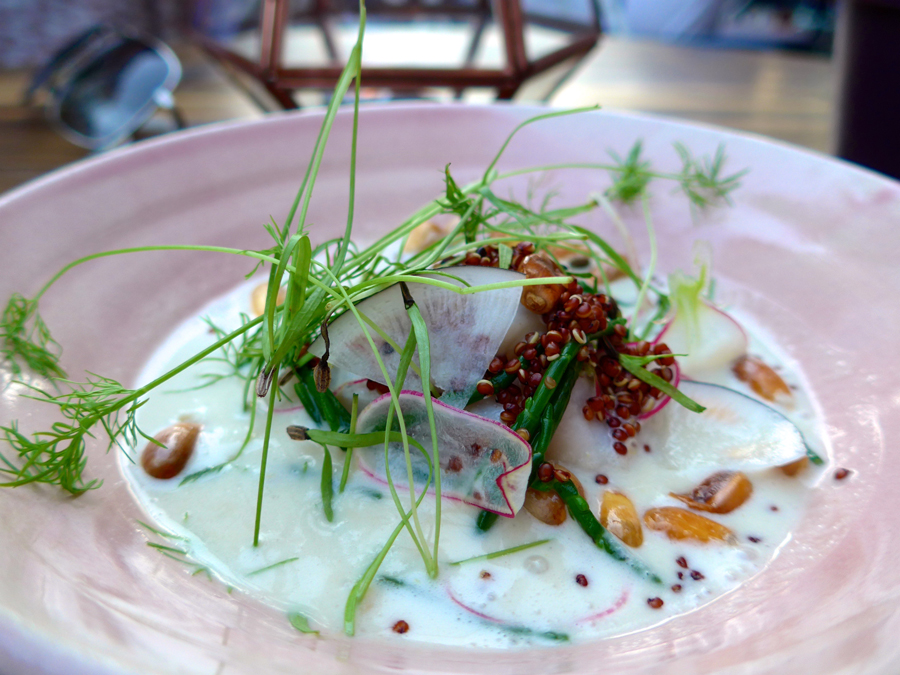 Then tucked into the seabass ceviche with coconut yuzu, cucumber, samphire and radish. It was almost too pretty to eat… almost. The extra large Peruvian corn kernels added a welcome crunch. 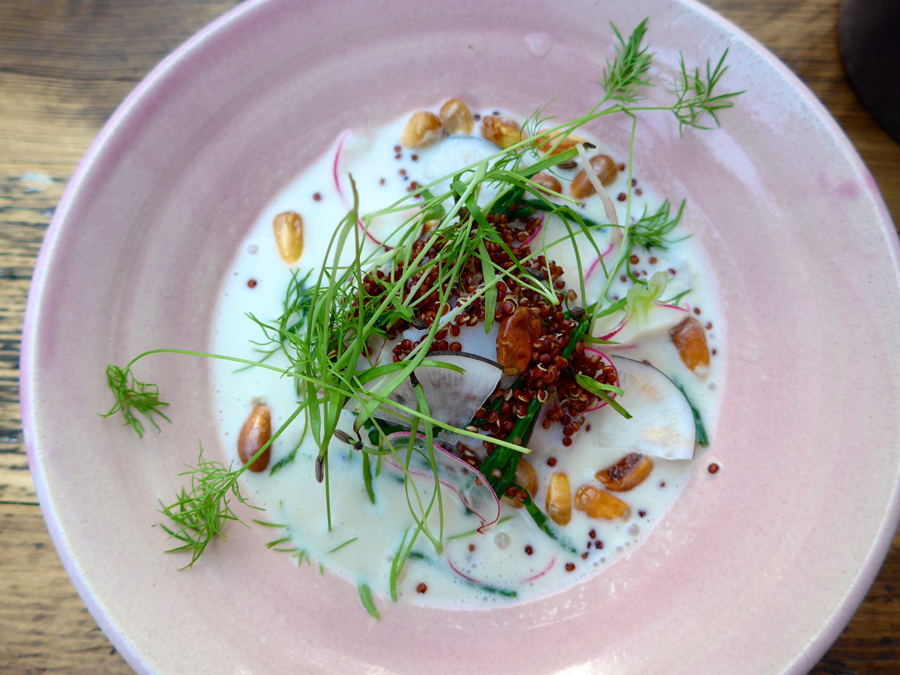 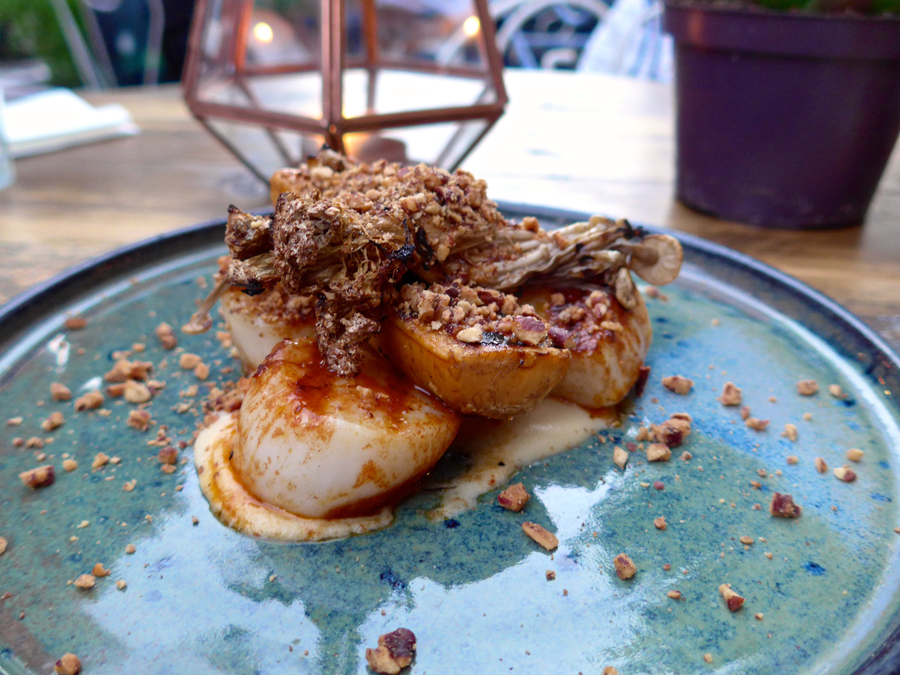 The scallops were amazing served with charred mushroom ‘steak’, apple miso and plantain. 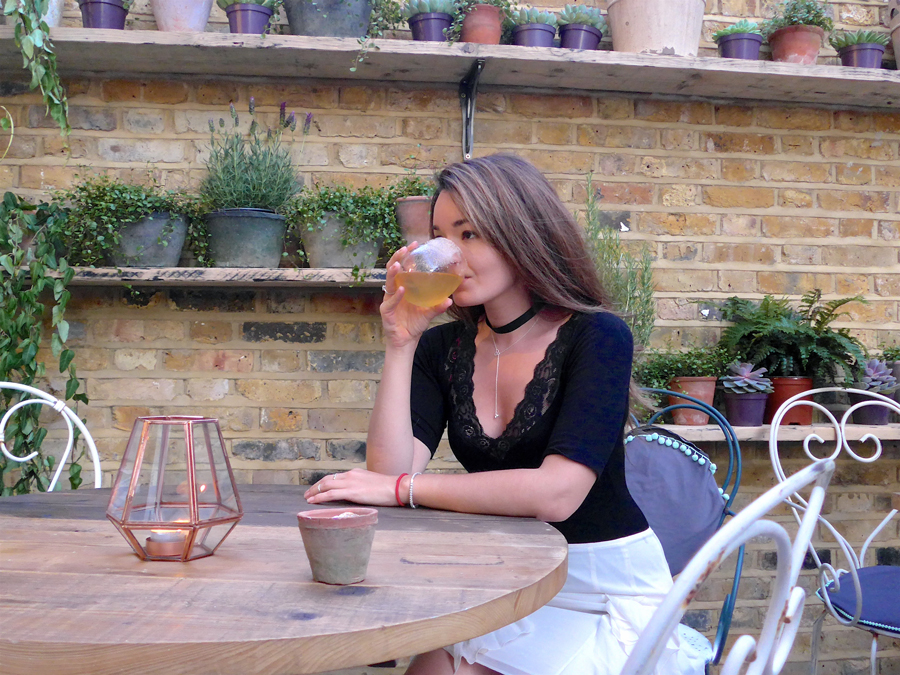 As the sun started to set, Head Chef Erren Nathaniel took some time away from his busy kitchen to sit with us. We were interested to know more about his inspiration and what we can expect from Chicama. Erren spent time working in Peru and told us how fresh fish was a part of daily life. The very best restaurants in the city served ceviche as did street stalls – each with their own flourish. Having soaked up all the local tips as well as some from London’s best restaurants, Erren has brought his creative seaside flair to the King’s Road. He ferments his own ingredients and experiments with the numerous different types of corn they use in Peru. He also calls the fishermen in Cornwall directly to place his orders and to hear about any interesting catches which could make it onto Chicama’s specials list. There will be updates to the menu and I’m going to be in touch to see if they need to hire an official taster #dreamjob. Erren was delightful and so enthusiastic about this exciting approach to dining that we’ll definitely be back to see what new treats he has in store… 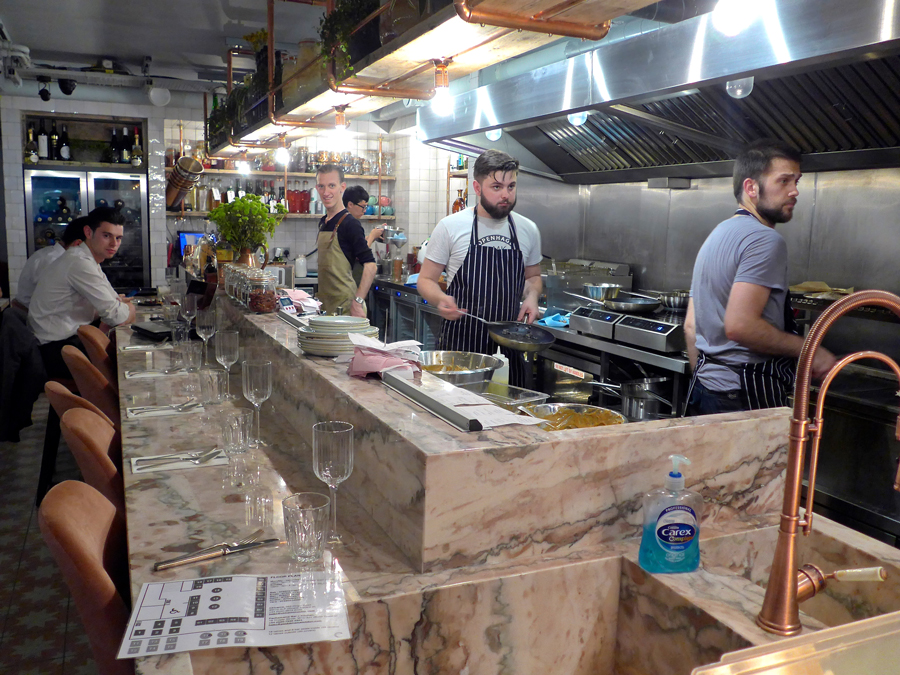 Chicama has a kitchen that opens onto the restaurant and I had to know how everyone stayed so chilled with so many picture perfect dishes to create! Well… there’s another kitchen hidden away downstairs where I’m told that the more Gordon Ramsey-esque moments happen. 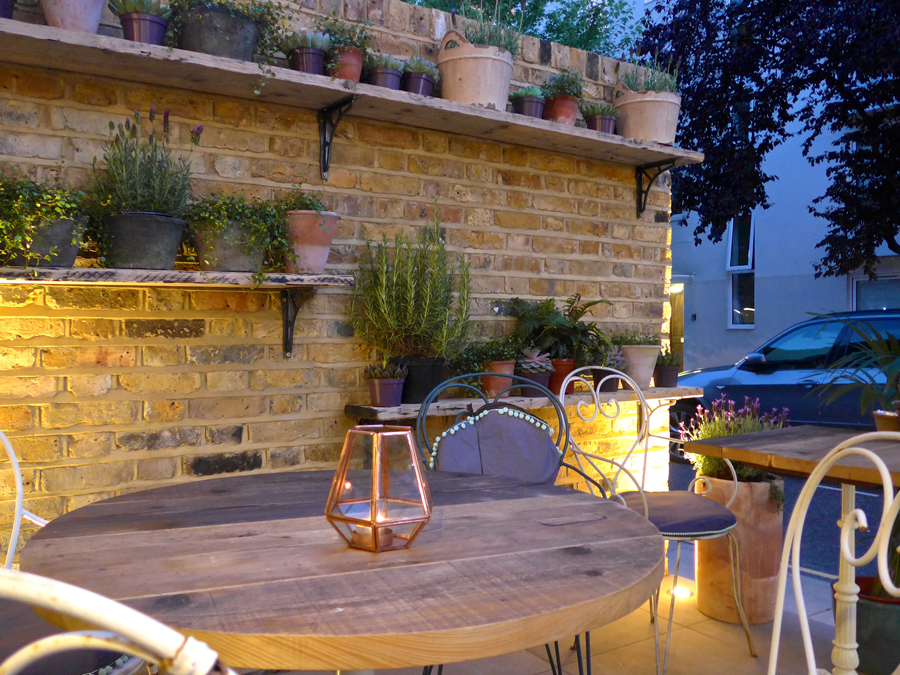 Next to arrive was the tuna Poke with aji panca Tiger’s milk, smoked egg and crispy potato. No tigers were harmed in the making of this dish. Tiger’s milk is the Peruvian term for the citrus based marinade that cures the seafood in ceviche. 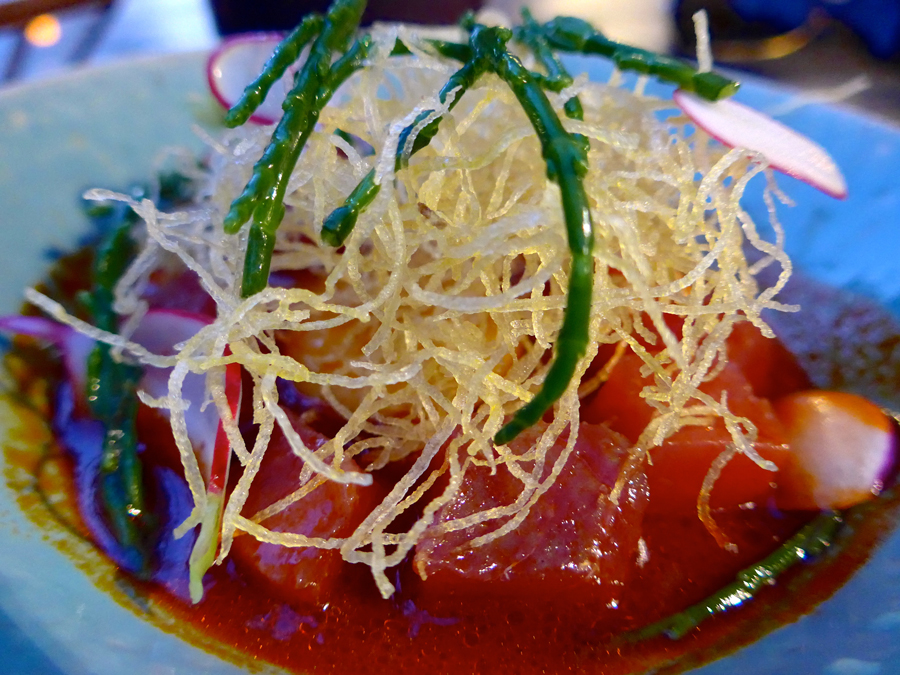 We finished up with salmon tiradito with aji rocoto Tiger’s milk, asparagus and crispy wild rice. 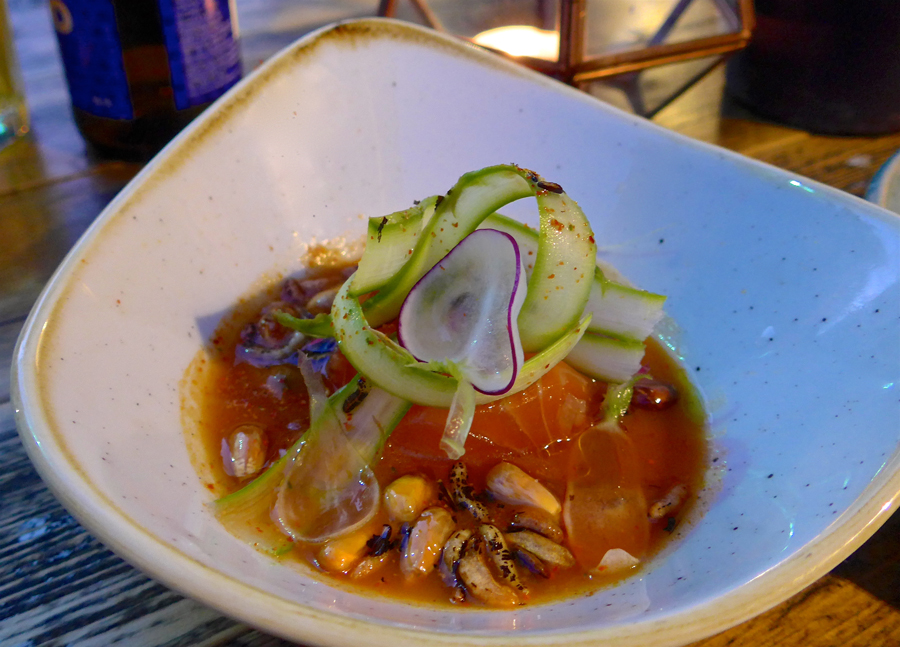 All the dishes were so beautifully presented that no-one could resist taking a few snaps every time a plate was put on their table. 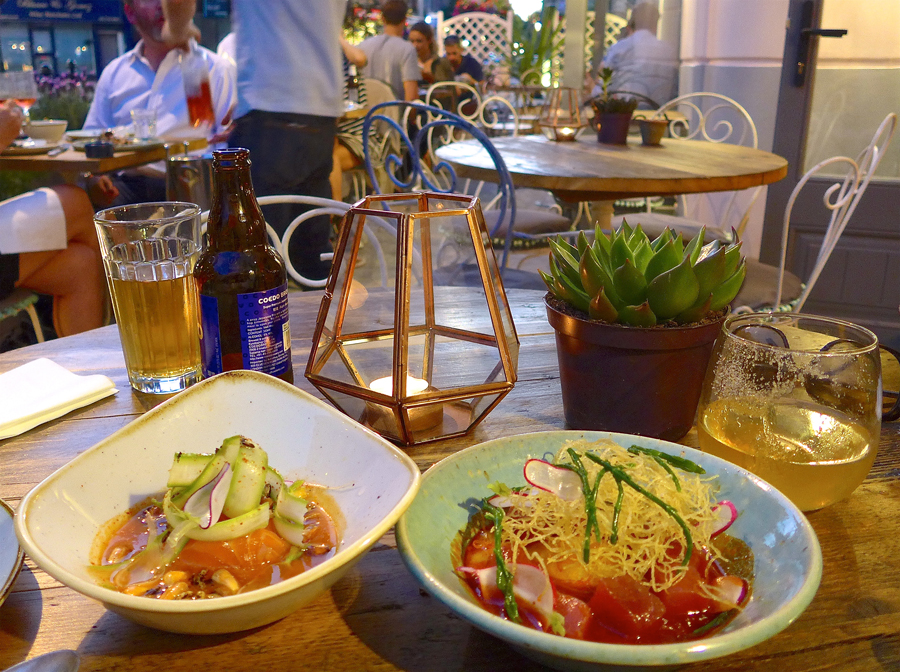 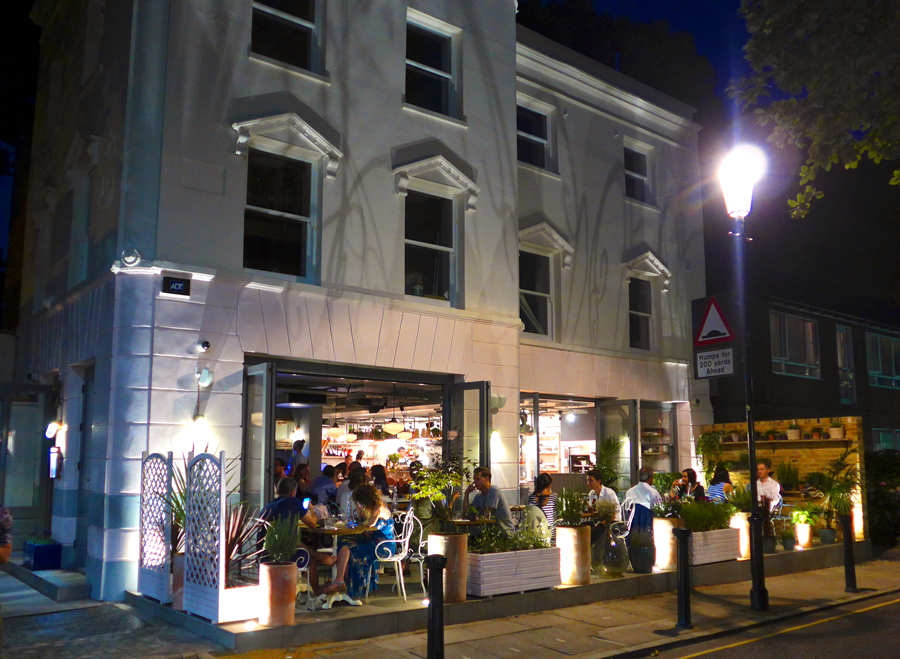 Chicama is well worth a visit for some of the freshest seafood without the 5 hour trip from London to Cornwall. We had six small plates and found this enough for the two of us for dinner. You can book your table online here but they also accept walk-ins after 6pm. Look out for me on the terrace!